Three young men followed 18-year-old Jesus Charriez and 21-year-old Luis Bermudez for several blocks, as they walked through Longwood on an October afternoon, the pair told police. The attackers yelled “faggot” and spit on the pair. Then, at 5 p.m. in front of a hair salon on the crowded corner of E. 163rd St. and Intervale Ave., they beat their victims, uninterrupted, for several minutes and stole a gold necklace and a cell phone.

Both Charriez and Bermudez ended up in the hospital with minor injuries. The police on the scene classified the crime as a robbery, with no mention of the anti-gay slurs that marked the incident.

The attack highlighted anti-gay feelings in the Bronx, where many gays hide their orientation out of fear. Although Bronx Borough President Aldolfo Carrion and U.S. Rep. Jose Serrano have condemned the incident, gay leaders called on more Bronx politicians to speak out against intolerance.

The attack changed the way Charriez views the neighborhood where he and Bermudez volunteer as a peer counselors at the Hispanic AIDS Forum, just a few blocks from where the assault took place.

“I call it my safe zone,” Charriez said. Since the attack, though, he has a hard time sleeping, and says it will be “a little bit difficult” to go out in the area.

Violent attacks are just one symptom of widespread anti-gay attitudes in the borough, Bronx gays say.

Alberto Antomnarchi, a 43-year-old Bronxite, has lived in all of New York’s boroughs except Staten Island, and he identified the Bronx as being particularly homophobic and closeted.

In the black or Puerto Rican community, being gay means “you lose your family; you lose respect in the community,” said Antomnarchi, who is Puerto Rican.

Family support is an issue for Mosey Diaz as well. “Even in my family, they make fun of the LGBT,” Diaz said, using the term for lesbian, gay, bisexual and transgender people.

Diaz, who is 18 and a lifelong Bronx resident, worked for the Bronx Community Pride Center at a gay pride rally in Barretto Point Park.

“Oh, I like what you’re doing here,” a man said to her, reading her “Bronx Pride” sign. “When he found out that it was LGBT,” Diaz said, “he was like, ‘That’s disgusting. I didn’t come here for that.'”

Still, Diaz said progress is being made in the Bronx: “It’s hostile, but the times have changed. It’s getting better.”

Diaz, who describes herself as “out” but not “open,” said that younger LGBT Bronx residents are increasingly willing to stop hiding their sexual orientation.

Reverend James Dusenbury is the pastor of In the Life Ministries, an interdenominational church on Commerce Avenue near Westchester Square that caters to LGBT parishioners. He agreed that coming out in the Bronx can be dangerous.

“Most people feel their safety is at risk, so they’ve got to live a closeted lifestyle,” Dusenbury said. “The only reason why I’m so openly gay is I want people to see I’m a regular person.”

The last time he reached out to another Bronx church, Dusenbury said, “They were not happy to hear from me.” Members of a neighboring church have called his church “the faggot church.”

“You will probably see an increase in homophobic language, in aggressive and sometimes violent behavior towards gay people,” said Heriberto Sanchez Soto, the executive director of the Hispanic AIDS Forum in New York.

When violence does occur, it often goes unreported by the victims, Soto said. Convincing victims to come forward is a challenge for gay advocates and leaders.

Soto said that hate crimes go unreported more often in the Bronx because violence is seen as a normal part of life in the borough.

“It’s like New York City in the 70s. We were all accustomed to all the violence, to the garbage in the streets,” Soto said. “‘Hey, this is New York City.’ Well, no, this should not be New York City; it should be better than this.”

Gay leaders also say that some politicians and members of the clergy share responsibility for widespread anti-gay sentiment.

“There is no tolerance in the borough for LGBT people,” said Lisa Winters, executive director of the Bronx Community Pride Center, an advocacy organization and gathering place for lesbian, gay, bisexual and transgender residents.

“We’ve begun to change that, but we have lots of work to do,” she continued. “We need our friends in the pulpit and elected and appointed officials to join with us in that effort. It’s embarrassing for the Bronx. The Bronx should be ashamed of itself.”

Winters named state Senator Ruben Diaz as one politician who could do more. Diaz opposes gay marriage, sued in an effort to prevent the city from financing a school for gay students, and tried to prevent the Gay Games from coming to New York, saying they could spread AIDS.

“He’s been very hateful and spiteful towards the LGBT in the Bronx,” Winters said. “He’s whipped people into frenzies.”

Diaz said that he is not anti-gay, and condemned the attack on Charriez and Bermudez, which he said he had not heard of.

“We need to protect people from hate crimes,” Diaz said. “I believe that anyone who does something like that should be subject to the maximum weight of the law. The police should spend any resource to go after them.”

After issuing his statement condemning the attack, Serrano said in an interview, “I don’t do any of this because it’s politically sound. On the contrary, some people think the politically sound thing to do is keep away.”

The congressman said his constituents understand that gays deserve to be able to walk down the street without being “picked on for their sexual orientation,” but added, “The problem is that so many elected officials get nervous about having to explain it, and so they’d rather not get involved. The biggest crime you can commit is the crime of silence.”

For their part, Charriez and Bermudez have refused to be silent.

They convinced police to reclassify their case as a hate crime after the initial police report made no mention of the slurs or the spitting. They also spoke out at a press conference held by the Hispanic AIDS Forum, which led to coverage on the evening news. Their experience has been reported by newspapers in Detroit and Nashville, putting a face on the debate over federal hate crime laws.

They say they spoke out for their own sake, but not just for themselves.

“We want to spread the word and make sure it doesn’t happen to anyone,” Charriez said. 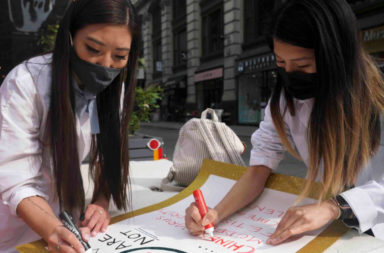 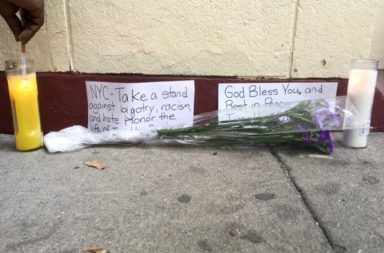