The district’s 22,000 Eastern Europeans and 16,000 thousand African Americans live side by side in peace. But on Election Day, Coney Island was divided.

In the eastern half of the district, a 63-year-old Russian immigrant, Rita – she didn’t want give her last name – said she was “horrified” at the prospect of a Barack Obama victory.

In the western end, an 18-year-old African American, Britney Thornton, said that if McCain wins, “we’re all going to die.”

The Eastern Europeans, most of who fled communism, react with hostility to anything that even faintly reminds them of home.

“Obama is the Soviet rule,” said Emma Kriklivaya, a 72-year-old home attendant from Ukraine. “He is a socialist. He will bring this country to what? I ask you.”

“To terror!” someone else’s voice chimed in from the back.

On Election Day, the Shorefront Y at the Boardwalk was filled with elderly faces. Time and time again, voters came in with the aid of walkers, attendants and motorized wheelchairs. Many of them were Jewish and had heard the ads that called Obama a Muslim.

“Main reason why I voted for McCain?” said Vladimir, a 76-year-old retiree. “He lowers taxes. He is more pro-Israel. All in all, he is a more experienced person.”

According to the Research Institute for New Americans, an immigrant study center, 65 percent of New York City Russians favor McCain, compared to only 10 percent for Obama.

Not everyone east of Ocean Parkway thinks this way. Younger voters tend to favor Obama regardless of ethnic background. But in a district where 45 percent of all residents are older than 44, the youth vote is of limited importance.

Across the neighborhood, the African-American and Caribbean communities supported Obama as passionately as the Russians opposed him.

Citizens of all ages lined up to Public School 288’s tidy gate. Many of them looked young enough to be voting for the very first time, but they were just as worried as their elders.

“If McCain wins, we’re going to have four more years of Bush,” said Von Tucker, 22, who works in Radio Shack. It was his first time in a polling booth.

“I believe in [Obama] more. I honestly believe that he will help others,” said Leslie Jeanette, a 41-year-old hospital employee.

Problematic Past, A Hopeful Future

No one mentioned McCain’s supporters directly, but the feeling of distrust simmers among Coney Island’s black community. In September, a community board meeting broke down into a screaming match over plans for a drug rehab center serving Eastern Europeans in Western Coney Island. And some are still sore about the influx of wealthy Russians driving up property costs, making much of Brighton Beach unaffordable for low-income families.

Both sides turned out en masse to support their candidate. Musya Naumova, an immigrant from St. Petersburg, Russia, said that she hadn’t seen such turnout in her five years of working New York City polls.

“I know most people by face,” Naumova said. “But many of these guys, they’re new. They’re voting for the first time.”

She glanced around at the lines of black people waiting to cast their ballot.

“Their man – for president? It’s historical,” she continued. “But the Russians are scared.”

According to Naumova, Russians feared that a Democratic win might increase crime in the area, especially against whites.

But doesn’t most of Coney Island as a whole lean Democratic? Naumova shook her head.

“Fear is stronger than party affiliation.” 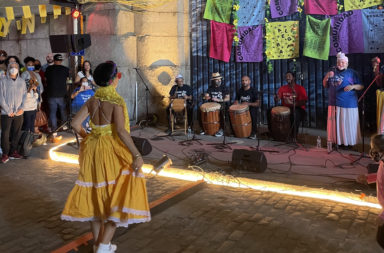