They looked like vertical metallic coffins, more than 2,200 voting machines lined up in rows in a Red Hook warehouse on the last Wednesday before Election Day.

Inside each one, distinctive levers that recorded an estimated 100 million votes stood ready for what could be their final tour of duty in service to democracy – a tour that began when Robert Wagner Jr. was mayor in 1962.

“Name something that lasts for more than 46 years,” said John O’Grady, chief voting machine technician for the New York City Board of Elections. “You know, even marriages don’t. Probably the best buy the city got.”

The deal comes to an end on Tuesday. This Election Day is likely the last time New Yorkers cast votes using the city’s aging fleet of pull-lever machines.

New York is the only state in the nation that still hasn’t updated its machines under the federal law that rose out of the disputed 2000 presidential election. It is still not clear which electronic machine will end up at polling sites next year.

But O’Grady said it won’t be the Shoup 3.2 Mechanicals, the last surviving pull-lever machines in the country. And their last day of service was set to be their greatest challenge. The elections board was expecting a record turnout, but O’Grady was confident in the machines’ ability to handle the anticipated increase in traffic.

“They’ve all been through a very thorough preventive maintenance program that began three months ago,” he said. “We check and test every machine before they go out.”

That means checking about 20,000 parts in each machine, working in a highly complicated grid, programmed by a team that knows them well.

“These are my babies,” said James Parks, 49, a senior technician who has worked on the 800-pound relics for seven years. “I love these machines. You got a lot of stuff on the inside – pins, rollers….We concentrate on making sure that everything is perfect.”

At the back of the dusty warehouse, another senior technician, Richard Kanar, picked up a few discarded parts scattered along the floor.

“This is a handle,” said Kanar, 41, who has worked for the Board of Elections for 12 years. “That’s a thick,” he said, holding a thumbnail-size rounded metal holder.

“That’s a three-strap,” he said, pointing to a flat, seven-inch-long silver piece of metal that looks kind of like a nail file with a hole at each end and in the middle. A three-strap allows only one vote for a candidate who is listed under more than one party for the same office.

‘World’s on My Shoulders’

It takes 85 technicians to get the machines ready for Election Day. The machines themselves are only one part of an intricate system that includes serial numbers, keys, police envelopes, protective counter numbers, and signed seals, all assigned to specific election districts.

“Sometimes I feel the world’s on my shoulders,” O’Grady said as he lit another cigarette. “If anything goes wrong in New York City, basically it’s front-page news.”

O’Grady oversees the massive task of preparing more than 7,700 voting machines citywide and then trucking all the equipment – besides the machines, there are 34,000 chairs and 6,000 tables – to some 1,300 polling sites.

They had four days to move everything to the polling sites, and O’Grady was feeling the pressure.

More than a dozen workers pushed the first group of machines toward the loading dock, and the machines rattled as they rolled onto the back of the truck. Most of the team members see each other more than their own families during the busy election season, O’Grady said. He and his staff have been working since July to prepare, and have worked many 12-hour days since October 9.
“The last mechanical machine is going to crush me before it goes into storage,” he said with a wry smile and a laugh.

Nearby, Yolanda Bentley, a senior technician, carefully copied a series of numbers from yellow police envelopes and wrote them onto “long sheets,” or logs. Each police envelope contains a key to a voting machine.

End of an Era

Each machine is assigned to one election district, and there are dozens of election districts at each polling site, said Bentley, 42, who lives in East New York and has worked for the elections board for seven years. The law requires an additional voting machine for an ED with more than 800 people, she said.

Surrounded by piles of envelopes, she marked some of them in red to remind poll workers to use the correct key to lock the machines when the polls close. If they use the wrong key, it will break in the machines, which causes delays on election night, she said.

Bentley said she was going to miss the lever machines, but that the most important thing on her mind was to get the job done in time for this historic election.

“Our families suffered, we got blisters upon blisters, [we’ve hit] a couple bumps in the road. But [the machines are] rolling out on time,” she said. “Main thing is to get everything out and in order. Either way, it’s history and we’re a part of it.”

MACHINE AGE: Election Day is likely the last time New Yorkers cast votes using the city’s aging fleet of pull-lever machines. Some 2,200 of the Shoup 3.2 Mechanicals are stored in a Brooklyn warehouse. 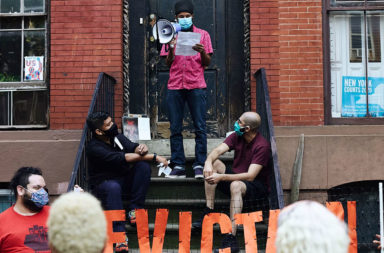 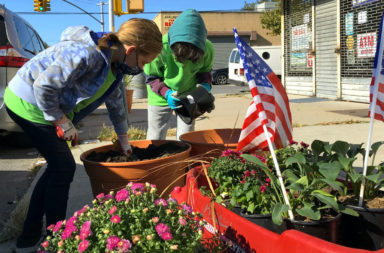 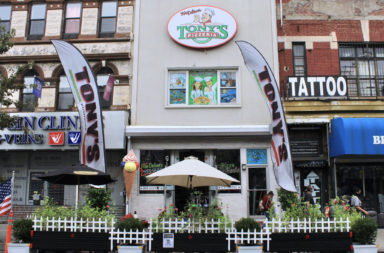