Some shopkeepers weathered the storm, while others reopened after the worst of Sandy, with or without power. Grateful customers flocked to familiar stores for food, supplies and, perhaps most of all, the reassurance of knowing that local merchants, though staggered, largely were unbowed.

“I was determined to stay open,” said owner Nikolas Milatos, who has lived just a few blocks away from his business his entire life.

“It’s a family kind of atmosphere here,” Milatos said, noting that he likes to constantly tease his employees, especially the newest and youngest worker. Kelly Vasilopoulos

Vasilopoulos, 18, ran between the back counter and the several tables she was waiting as the diner roared back to life. During slower moments, she chopped strawberries that topped a fruit salad or blended a milkshake. She said she walked a mile and a half to get to work but she said she didn’t mind.

On Wednesday morning, Dean Delgado sat down with his girlfriend for breakfast. They live 10 blocks away, and frequently order in, but only come to the diner a few times a year.

Delgado said he was proud to be a Queens resident because Sandy only caused his lights to flicker. He posted to his Facebook “Ditmars – 1, Sandy – 0.”

BROOKLYN – Merchants, their employees and friends walked along Mermaid Avenue in Coney Island on Wednesday morning to survey the damage.  The storm surge had submerged parts of the neighborhood.  But humans had done some damage, too.

From his friend’s apartment window, Dikson Fermin, 40, said he saw the looting begin as the floodwater was still receding.

“The people started to come out,” Fermin said as he walked amongst the scattered bags of beans, vinegar bottles and canned goods that littered the wet floor of Five Deli Grocery, the store where he worked for 12 years.  “I saw the people running.  I said, ‘Why are people running in the street?’  After that, I saw people come with a bat and break all the gates.” 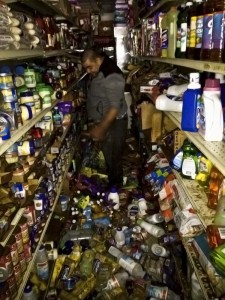 Daniel Merced, 47, a maintenance worker cleaning several properties along the avenue, said he also saw the looting. He ticked off some of the stores hit.

“Rent-A-Center? Done.  Because they cleaned them out,” Merced said.  “Rite-Aid? Another one that got cleaned out.  The only one they didn’t touch was Dunkin’ Donuts, I guess because all the cops are standing there.”

The NYPD set up a staging area Wednesday in the parking lot of a looted shopping center, fanning out to stand at nearly every corner along the avenue.  They talked with the shopkeepers who pushed muddied water and still-soaking furniture out onto the sidewalk. Police declined official comment on the looting.

MANHATTAN – At Soho’s Spring Lounge – a.k.a. Shark Bar – the bar manager lit candles, while the bartender used a flashlight to find beer in a sink full of ice.

A flame illuminated the “Bottled Beer Only” and “Cash Only” signs written in permanent marker and taped to the draft beer handles. Strangers surrounding the wooden bar bonded over bottles of Budweiser and stories of how they survived Sandy.

“If any bar is gonna be open, it’s gonna be Spring Lounge,” Lexi Peters, a British expatriate who lives a block and a half away from the bar, said, her lips purple from a glass of red wine. “Everywhere else is ‘no dice.’ This is ‘dice.'”

Once again, Spring Lounge became a refuge for New Yorkers – a role the establishment known for its gallery of shark taxidermy  played after 9/11, the 2003 blackout and last year’s Hurricane Irene.   “We kind of have that reputation,” said bartender Patricia Villari said. “People know to come here through any tragedy.”

BROOKLYN – Hurricane Sandy was no holiday. But in one respect, the storm reminded Kevin Persaud of one.

“It was crazy!” said Persaud, 31, who manages a Key Food supermarket in Sunset Park. “Thanksgiving is our best holiday, and it was busier than Thanksgiving!”

Oveisos Khan, 38, who manages a small corner grocery store a few blocks away from a Pathmark with noticeably empty bread and bottled water sections in Borough Park, said he kept his shelves stocked with the necessities despite being hit hard by the hurricane. He lost more than $5,000 worth of merchandise after a power outage forced him to throw out large amounts of perishable goods.

Asif Mahmood, who manages a small grocery store on Fort Hamilton Parkway next to Maimonides Hospital, said a last-minute restocking helped him prepare for customers.

“I sold out, so I go in the big supermarkets and buy from there,” said Mahmood, 37. “I have regular customers, you know? I don’t want them to go some place else. That’s why I keep my stock up to date.”

MANHATTAN – With all four of his gas pumps roped off, Turgay Kadioglu’s Shell station looked more like a parking lot than a service station.

Cars in need of repair filled his lot, which filled with knee-deep water after Sandy’s Monday night pit stop at the corner of 96th Street and First Avenue.

Kadioglu’s insurance company has not answered his calls. He has no idea how much he’ll get, if anything. Still, he tries to stay upbeat as he concentrates on repairing cars.

“The next time it floods, we can swim,” he quipped. “Other than that, what else can you do?”

Man on a Mission

MANHATTAN – The Community Kitchen and Food Pantry of West Harlem didn’t let Sandy get in the way of feeding the needy.

“We have a mission to fight hunger,” said Daryl Foriest, the director of food distribution. “This is when you really, really need it. At times when there’s no other option.”

Standing in front of the food pantry, on the corner of Frederick Douglass Boulevard and 116th Street, Foriest was directing staff members on Wednesday as they unloaded food from a delivery truck.  Foriest picked up all 13 of his employees to makes sure they got to work safely.

BROOKLYN – In a place like Park Slope, said Ezra Goldstein, co-owner of the Community Bookstore on Seventh Avenue, “the real neighborhood stores” were quicker to re-open than chains like Barnes & Noble because workers at the smaller places live nearby.

And there were plenty of customers as transit was limited, schools closed and many people took the day off. “We were mobbed,” said Goldstein. “We did an enormous amount of business.” 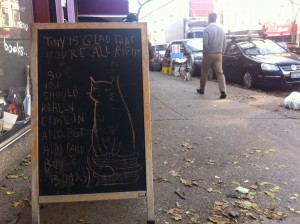 TURNING THE PAGE: The Community Bookstore in Brooklyn relied on local employees to stay open. PHOTO BY: Susan Armitage

The Wafels & Dinges food truck stood ready to feed passersby at Seventh and Carroll. At The Bagel Market, where employees wore Halloween face paint and bunny ears, the line stretched nearly to the door. Cousin John’s Café and Bakery had a steady stream of customers – including a young astronaut who came in to show off his costume.

MANHATTAN – The long line for coffee at Dunkin’ Donuts on the morning after Sandy made landfall marked a sign of Central Harlem quickly sprouting back to life.

“We were short of people,” said Mohammed Salim, manager of the store at 125th Street and Lenox Avenue. “Usually we are working seven people. Yesterday we only had three.”

Some local merchants conducted routine business during the storm.

“It was like a normal day,” said Nageeb Ameen, the manager of Alzyadi Deli at 129th Street and Adam Clayton Powell Jr. Boulevard. “It was just windy.”

Ameen, 32, and other family members kept Alzyadi Deli open 24 hours as usual. Their home’s convenient location atop the store made commuting easy.

Some delivery drivers were already driving their routes again by Tuesday.

“I work every day,” said Luis Angel Perez, 51, who drives a truck for Jamali Floral and Garden Supplies. “I have to.”

Just down the block at Planet Fitness, employees had hitched a ride in their boss’s car. Front desk staffer Daniel Rivera lives past 221st Street, but Miguel Delacruz drove him and other employees to work and back.

MANHATTAN – Alicia Martinez of New York Dog Daycare in East Harlem drove south to pickup animals whose owners were forced to relocate from such neighborhoods as Wall Street and Battery Park City.

“Our clients called up us and informed us that they had to evacuate because they have no hot water. They had no provisions — nothing,” Martinez said. “And they had to leave to a friend’s house and their dogs are possibly not welcome. So we went downtown and rescued a whole bunch of doggies.”

They arrive in style, too. Outside of the E. 110th street center sits two stretch limousines, which serve as the Martinez’s preferred method of dog pickup.

“We didn’t jack the prices,” Pascarella said. “You can’t do that, that’s not right.”

Al Pelliccia, manager of the Key Food grocery store on 31st Street, said raising prices during a crisis is unnecessary.

But consumer advocates and government officials worried that increased demand for groceries and other necessities might tempt some store owners to raise prices. Price gouging occurred at some gas stations, hotels and other businesses along the East Coast during Tropical Storm Irene last year.

Astoria resident Angela Donahue said her son was charged twice as much as usual for water during Irene. But this time around, she said she hasn’t seen any evidence of price gouging in her neighborhood. “Last year, the prices went up, which is wrong,” she said.

LONG ISLAND – At John’s Country Store in Patchogue, locals were drinking coffee and talking storm damage.  Two customers were comparing how deep the water was in their basements.  One customer said the water was two feet deep. The second said there was three feet of water in his basement.

“We’ve been pumping water out of our basement all night,” the second customer said.

They got to chat over coffee because owner John Catanzaro was determined to open his South Ocean Avenue store – whether or not he had power ­– so that his loyal customers could get basic supplies.

“They just got hit 15 months ago,” Catanzaro said, referring to Hurricane Irene.  “They just finished rebuilding their homes, and they got hit again.  They’re coming in here with this devastated look on their faces.  People are just getting crushed down here.”

QUEENS ­ – Sandy couldn’t shutter shops in Jamaica, where some stores stayed open through the worst of the storm and others quickly reopened, with power or otherwise.

“We know people in the neighborhood depend on us for their food, groceries and supplies,” said Rudy Diaz, store manager at C Town on Foch Boulevard.

“Many trees fell on 115th and 116th Avenue and there were power cuts everywhere in the neighborhood,” said Vanilla Spencer, owner of Lee’s Variety Store on Sutphin Boulevard.  “As soon as power went off, people started coming in to buy candles and batteries. There were no big crowds – I didn’t make a lot of money. But I know that people in the neighborhood come to me when they need anything.”

Customers appreciated the shopkeepers’ efforts. “This is a residential area. We don’t have a lot of shops around,” said Ricardo Lopez. “It is good that shops are open, so we could buy supplies and food during the storm.”