The building on West 107th Street where 120 women lived was rare thing in New York City: a shelter welcomed by the neighborhood.

On a rainy night this fall, a group of Upper West Side residents tried to stand in the way of city Department of Homeless Services employees after a first contingent of women were removed a few days before. The city is transforming the shelter into a facility for men.

That night, after an emergency meeting held inside, someone in the group of protesters yelled, “Shame on you!”

The outburst highlighted the recurrent tension between DHS and neighborhoods hosting, or being slated to host, shelters amid a homelessness crisis. Opposition to men’s shelters has become routine in the city, with recent episodes playing out dramatically in Brooklyn and Queens.

A record 63,839 individuals slept in the city’s shelters in January 2019, according to the Coalition for the Homeless. Almost a year later, DHS reports that the number is still close to 60,000. This represents a 60-percent increase since 2013. (Families continue to make up the great majority of the shelter population.)

In December, the number of single adults passed the totals recorded last winter, reaching about 12,000 men and 4,500 women.

The City’s Reason for the Switch

The decision to remove the women from the Upper West Side shelter was driven by the increase in the number of homeless men in need of shelter, according to the city.

“What is changed in recent months is more and more, we’re seeing single males who come forward who need shelter,” Mayor Bill de Blasio said on Oct. 25, responding on WNYC’s Brian Lehrer Show to a call from Evelyn Lanoix of the 107th Street Block Association. “There are not enough spaces, right this minute, for all the single men who need shelter. We had to make moves to accommodate them.”

Support for the women’s shelter on 107th Street grew out of a nearly decade-long relationship cultivated by neighbors, shelter management and residents.

Neighbors initially had doubts when the building, known as the West Side Inn Hostel, transitioned to a women’s shelter. Then as now, some complained about DHS acting unilaterally, local media reported. Many challenged the idea of offering a nine-year contract to landlord Mark Hersh, dubbed the “West Side Batman” for allegedly harassing tenants with a baseball bat.

Nonetheless, after the shelter opened, residents slowly made their peace with it. “Initially, we were a little wary and there were a few ups and downs. There were issues with the boyfriends coming outside women smoking outside, but as a community, we addressed it all,” said Lanoix.

The block association spearheaded the relationship. The need to respond to complaints about noise, smoking or other disruptive behavior evolved into an embrace of the shelter. Neighbors donated toiletries to women in the shelter, and the women participated in events like the planting of street trees.

Staff from Help USA, the organization that managed the shelter, shared the neighbors’ perceptions of a place that served its residents and its community well. In an email to a block association member, chief of staff Stephen Mott said, “We do agree that the women’s shelter was a ‘model of homeless services’ that provided ‘hard-earned stability.’” 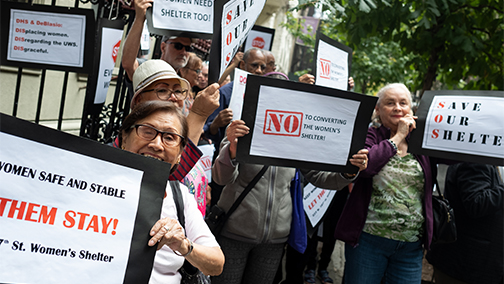 Neighbors of the West 107th Street homeless shelter protest the plan to replace women in the facility with men. (Leonardo March)

In the weeks after the switch to men was announced, frustration built over what neighbors called DHS’s lack of public communication. They organized a protest and a press conference with local elected officials. They created an online petition with almost 3,600 signatures on Change.org. Two resolutions asking DHS to put the plan on hold were overwhelmingly approved by the board of Community District 7.

Some residents of 107th Street say they are concerned about safety now that homeless men will live in the shelter.

“What does it mean for the block, for the neighborhood, as a woman, how a long line of men on the street will affect me? Not sure about it, but it will change my routine,” said Rosa Arena, a union organizer who lives on the block.

Some of the women who were transferred described a disorganized and confusing process. Given 48 hours’ notice, they could declare a preferred borough to be moved to, with no guarantees.

“Nobody knew where they were moved to; I found out the day of,” said one woman. (She and other shelter residents requested that their names not be used here, for fear of repercussions from DHS.)

She was transferred to a shelter in Brooklyn to find, once there, there were no beds available. At a second location in Queens, she said she was told, “We made a mistake, you’re not supposed to be here.” More than 12 hours after her removal from the shelter, DHS found a bed in a Jamaica, Queens facility.

The relocation placed some women in locations farther away from where they work. “It used to take me 35 minutes to get to my workplace, now is about one hour and a half,” one said.

“We helped each other. If someone didn’t have relatives, we became their family,” said a third woman. She went back to school to study early childhood education after encouragement from friends at the shelter. “Why would you want to take that from women trying to make a change, make a difference?”

Two months after the transfer of the women, about 40 men are living in the 107th Street shelter. In an email to neighborhood members, DHS called a “Community Advisory Board” meeting to address local concerns. Members from the block association refused to participate. 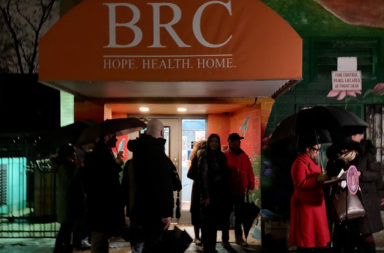 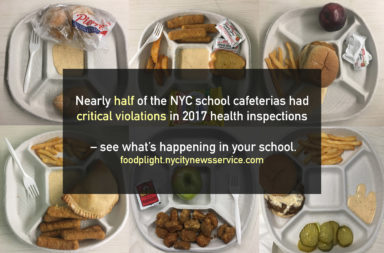