Anti-war activists gathered in front of the Armed Forces Recruiting Station in Times Square on Jan. 8 to protest the US military presence in the Mideast.

About 100 protesters braved the cold, chanting “US imperialists, number-one terrorists,” as they called for the US to avoid war with Iran. The rally followed protests in dozens of American cities on Jan. 4.

Tension between the US and Iran have escalated since Donald Trump ordered the Jan. 3 killing in Baghdad of Iran’s top general, Qassem Soleimani, who also commanded the Quds Force responsible for military and clandestine operations outside Iran. In retaliation, Iran fired missiles into bases housing American forces in Iraq on Jan. 7.

“It’s important for us to oppose these wars because they claim that they’re doing them in our name, but they are not in our name, “ said Joel Northam, 32, an information technology worker from Brooklyn who is part of Intercoalition, one of the rally’s organizers. “I have more in common with an Iranian that I have with Donald Trump.”

The protestors contend that the US military presence in Iraq and elsewhere in the Mideast does more harm than good. 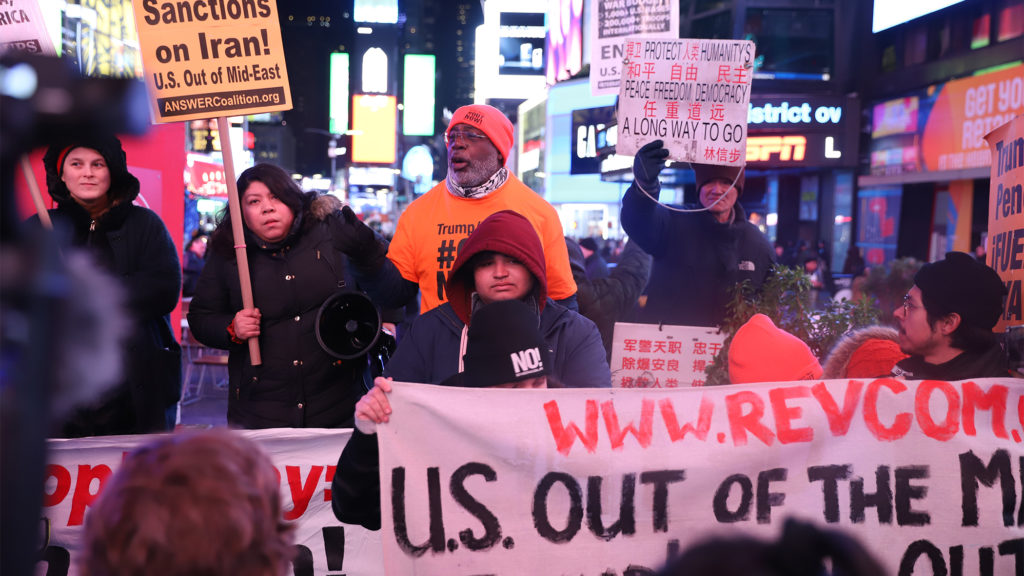 “Other people’s lives are not less important than US lives,” said Carl Dix of the Revolutionary Communist Party, in orange hat and shirt. (Leonardo March)

“They say they are doing this to save US lives, it is not true,” said Carl Dix, 72, a founding member of the US Revolutionary Communist Party, another rally organizer. “Other people’s lives are not less important than US lives.”

Dix said that attacks on Americans in the Mideast by forces directed by Soleimani did not justify escalating the conflict with his assassination: “Sure, they also killed US soldiers and US mercenaries. But they should not have been there in the first place.”

The rally was promoted by the ANSWER Coalition, the Intercoalition, and the Out Now Movement. The groups have organized two protests in Times Square this year and are working on webinars and film screenings about the impact of US military policies.

The Trump administration has defended the killing of Soleimani as a counter to Iranian military adventurism that threatens security in Iraq, Syria, Lebanon and beyond. At least one passerby agreed.

Greg Benjamin, 50, of Manhattan, who works in financial services, called the protesters ill informed. He said most Americans would support military action if they understand how Iran operates in promoting its own interests.

“I support a complete military attack of Iran for the removal of its regime,” he said, adding, “I know most people in the Middle East would, that’s where I come from.” He said his Turkish heritage has given him a deeper understanding of how Iran is “imperialist, colonialist and terrorist” in attempting to project Shiite influence in Iraq and the region. 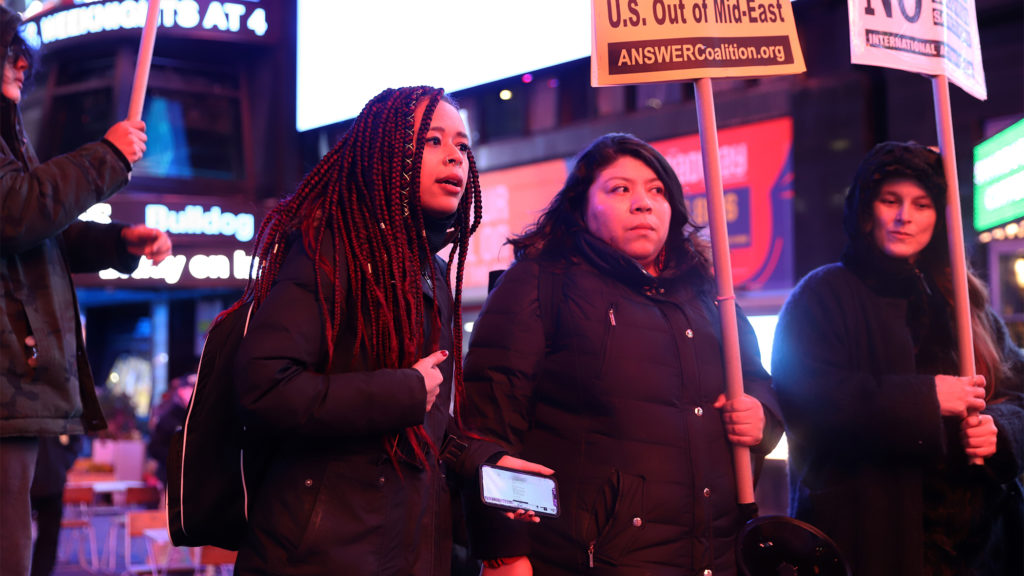 “Our tax dollars, instead of funding our livelihoods, are going to the insane military budget,” said Monica Cruz, 25, of the Party for Socialism and Liberation. (Leonardo March)

For  the protesters, though, continued US intervention is not the answer but rather the problem itself.

Monica Cruz, 25, of Harlem, an ANSWER volunteer and a member of the Party for Socialism and Liberation, a Marxist group, was one of the speakers at the Times Square event.

“We really do have a duty here in the belly of the beast, the US empire, you know,” she said. “Our tax dollars, instead of funding our livelihoods, are going to the insane military budget.” 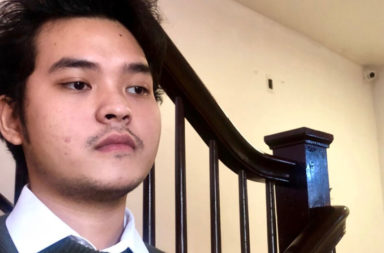