A Bronx-based fast-food franchise has steadily risen over the last two decades, its growth tied to West Indian immigration to New York.

Golden Krust, a Jamaican-style restaurant and bakery, has filled a niche by providing inexpensive and familiar food for Caribbean immigrants — and it’s customer base is now expanding to non-West Indians.

“It’s the only franchise that really sells Caribbean food,” said Annette Runcie, who owns a Golden Krust franchise in Queens Village. “I think there was a big demand, especially in New York City, and it was just a perfect thing to do.”

She added, “Most Caribbean folks get home-cooked meals every day, there’s really not much fast food for them to eat.”

Still, the company has been able to expand to non-Caribbean neighborhoods as well as beyond New York.

The Caribbean population was critical for the growth of the company, said Golden Krust President and CEO Lowell Hawthorne. â€œI know we have gotten that base and have been successful in it,” he said. “It helps to propel the organization to the mainstream market.”

Hawthorne, a Jamaican immigrant, opened the first Golden Krust bakery in the Bronx with his family in 1989. Three years later, there were 17 Golden Krust stores. Now there are more than 115 spread across New York, New Jersey, Connecticut, Florida, Atlanta, Philadelphia and Maryland.

Yet Golden Krust thrives most in areas like eastern Queens, which has one of the most concentrated populations of West Indians in the city. More than a fifth of the immigrant population came from Jamaica, and a large bulk of the rest originated in Haiti, Guyana and Trinidad and Tobago, according to the 2000 census.

In Community Board 13 alone, there are five Golden Krust restaurants.

“The company’s going to consistently grow its brand in our core market, which is basically the large Caribbean community, which are in a couple of new states,” said Hawthorne. “We’re going to expand from our market to the mainstream market. The company plans to open about 30 to 40 stores per year.”

Runcie, who was born in Jamaica, credits her storeâ€™s success to heavy amounts of foot traffic and a nearby bus stop. She said while most of her customers are Caribbean, her restaurant attracts a strong mix of other ethnicities.

“If you locate in a certain area where people are, you have a clientele already, that is No. 1, that’s key,” said Vera Weekes, education director of the Immigration Center at Medgar Evers College.

Jamaican food lends itself well to fast food, said Ramin Ganeshram, Caribbean food expert and strategist for Iconoculture, which studies consumer trends. Beef patties are cheap and can be eaten with one hand, which makes them both portable and convenient.

“On a more cultural level, you can say anything that’s a street food in the country of origin has a very good chance of becoming a fast food in the United States,” she said. “Street food is the fast food of the rest of the world.”

And non-West Indians are catching on. “We are gaining acceptance from pretty much all markets right now,” said Golden Krust spokeswoman Candice Richards. “North Americans are just gravitating towards West Indian cuisine as they become more familiar with the Islands through their vacations and just interacting with the many West Indians that live in New York and the United States.”

Golden Krust’s fast-food environment helps, Ganeshram said. “If you go into a place and see a light board of food and photos and there are trays,” she said, people understand that “it’s a comfortable environment to try something new.”

At Golden Krust, you get full meals. “You get the real deal,” Weekes said.

“The real deal” is anything from the festival, a fried corn fritter about a half a foot long, to the oxtail stew. Customers can find the super salty and peppery ackee with salt fish, a dish that resembles scrambled eggs but is made with ackee, a highly poisonous fruit that takes special care to harvest just right.

“It is very good, instead of the fast food, hamburgers and stuff like that, I think this is more appropriate,” said Margery Baptist, who immigrated from Haiti and stopped off at the Queens Village Golden Krust one recent day. “If one parent can’t cook the rice, beans and vegetables, at least they can pick it up, they have it here, instead of the fried food.”

Even non-West Indians appreciate Golden Krust’s homemade taste. “It’s hard to find a restaurant that serves this kind of food,” Long Islander Angel Figueroa said outside the Golden Krust on 8th Ave. in Midtown. “When you have it here and it taste like homemade, you got a winner,” he said about his favorite item, oxtail, which he said he first tried at a Jamaican party.

Though Ganeshram believes Golden Krust may hit America the way of Chipotle, the popular Mexican food franchise, did, she does not see it branching out worldwide.

“The taste literally for American things is why Burger King and McDonald’s and Pizza Hut have become globalized, it’s not the food itself,” she said. “If you look at with that logic I don’t think something like Golden Krust will become global because it doesn’t represent something American — it represents the Caribbean.” 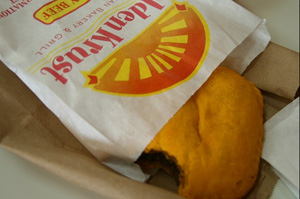 MEAT TREAT: Golden Krust's signature beef patties have helped made the franchise a success in New York's Caribbean neighborhoods and beyond. 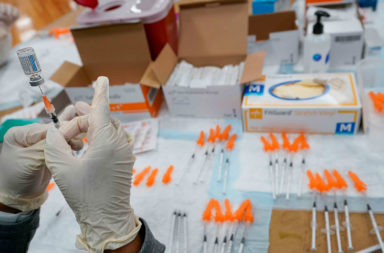