One day in early November, Arny Polenova walked down Montague Street on his way to deposit a check at his neighborhood Commerce Bank.

The 65-year-old, who has lived in Brooklyn Height nearly half his life, knew that after he passed Chase Bank and Citi Bank, that Commerce was next. But when Polenova reached the corner building, a shiny green “TD” hung in the window where his trusted red “C” held court the previous day.

“Commerce Bank’s heavy duty: no matter where you go in the city they have new locations,” said Polenova. “And the next second they’re TD.”

Days of Pens and Lollipops

Many New Yorkers were as confused as Polenova by the seemingly overnight change at Commerce, which arrived on the city scene in 2001 and quickly became known as much for its free pens and lollipop as its casual atmosphere.

Though Canada’s Toronto-Dominion Bank bought Commerce’s parent, New Jersey-based Commerce Bancorp Inc, in March for $8.6 billion, Commerce locations along the eastern seaboard only got their makeovers in the first four days of November.

In an attempt to coordinate the unveiling of the name change, new “TD” signs had been quietly erected behind the old Commerce “C” at the bank’s 67 branches in New York City weeks before the quick switch.
After seeing the TD logo in the window of his local bank, Professor Russell Winer, head of the Marketing Department at NYU’s Stern School of Business, wondered if Commerce was the latest casualty of a volatile market.

“TD probably felt that any lingering of the Commerce name would divert resources away from the new brand,” said Winer. “But it may have looked clumsy given our current banking situation.”

The timing was linked to the corporate calendar: TD’s budget year begins in November, said Rebecca Acevedo, a spokeswoman for the bank.

“People thought Commerce was bought out because something was wrong with the bank,” said Acevedo, “but we’re triple-A rated.”

The Canadian bank originally wanted to rename all of its 1,100 East Coast locations TD Commerce. But after a lawsuit from Commerce Bank & Trust Co. Inc., of Worcester, Mass., the company decided on TD Bank. When TD and Commerce merged on May 31, 2008, the combined companies became one of the 20 largest commercial banks in the United States with more than $119 billion in assets.

But for Polenova, one of Commerce’s biggest assets was strikingly missing on Black Friday when he went to make another deposit. After looking for a pen to fill out his deposit slip, he finally asked a teller for one – only to be asked for the pen back when he was finished.

“TD took over Commerce, who had nothing but pens,” said Polenova. “Where are the pens?”

Acevedo said TD plans to continue the tradition of passing out freebies to its customers, though the sluggish economy might force the bank to scale back from the 21 million pens and 12 million lollipops that helped spread the Commerce brand in New York. The TD pen is green and the ink is black instead of blue, but the pens are still extra wide and make a pronounced click.

“It wasn’t the color that made the brand,” said Acevedo, “it was the customer service.” 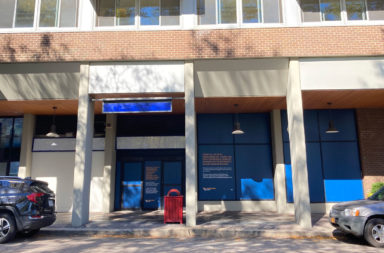 Banking on a Return