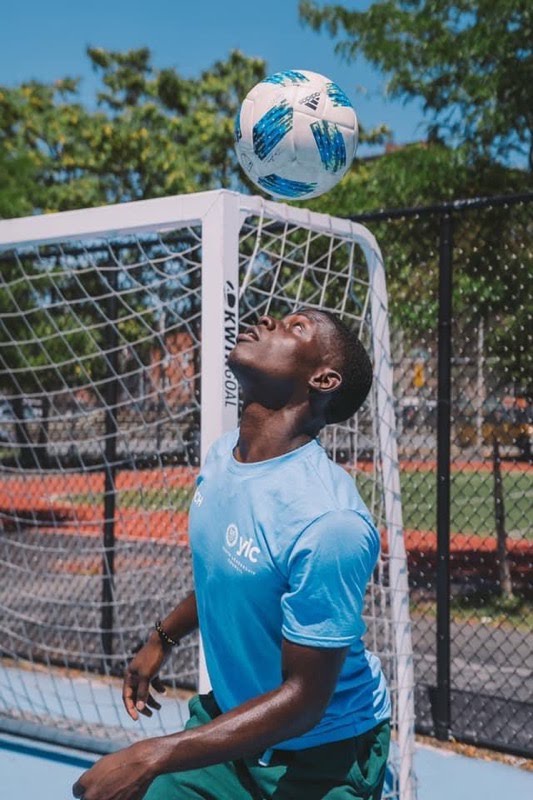 “I love it because it’s inclusive, you know, no matter your background, whatever your gender, your race, whatever—everybody comes together for soccer,” Kweku Brew said of the sport that provided a path to a seat on a Bronx community board.

When Kweku Brew arrived in the Bronx at age 11, he felt like he’d made it to paradise. He had just left his home in Ghana to join his mom in New York.

“America’s not a promised land,” he said. “That’s like a commercial they show to other countries on TV.”

Today, he feels New York City hasn’t gotten any better for Black and brown kids. That’s why Brew, now 19, joined Community Board 4 in the South Bronx.

While community boards are advisory only, they can have powerful influence on which neighborhood priorities reach higher levels of city government. Members as young as 16 have been allowed to join boards since 2014 yet there were still only a handful serving in the Bronx by 2019, the latest year the numbers have been reported boroughwide.

Bronx Borough President Ruben Diaz, Jr. recently encouraged more young people to join their boards in 2021. Lawmakers such as State Sen. Jennifer Ramos and City Council Speaker Corey Johnson are among those who got their starts as community board members.

“The board is really an opportunity, from my perspective, for us to cultivate leaders in the community,” said Paul Philps, district manager for Community Board 4.

From his work on restorative justice for juveniles in high school, to his mentorship of young soccer players, to his passion for housing justice and racial justice in the streets this summer, many have come to see Brew, a Brooklyn College sophomore, as a leader and role model.

But he doesn’t see what he’s doing as political.

“Politics is about making friends or enemies,” he said. “And I don’t want to be anyone’s puppet.”

From Ghana to the Bronx

Brew has been steeped in a sense of his place in history from an early age. He grew up in Cape Cost, Ghana, just 15 minutes away from the Cape Coast Castle, an infamous port fortress built by European invaders. Africans were held in dungeons before being taken to the Americas to be enslaved. He spent a lot of time at the castle—now a museum site—with family members who worked there.

“I think that there’s a bigger reason why I was born so close to that slave trade and into the family I have today,” Brew said.

He was raised by his grandmother and great-aunt, whom he calls his two grandmothers, while his parents worked to build a new life in New York. In school, he was the kid who was always asking questions. He played soccer constantly. “Soccer was just a natural thing everybody was doing,” he said. “We used to have tournaments, the elderlies would just watch us play. It was just competitive and able to just have fun, you know? It was always amazing.”

When his mom, Rebecca, decided it was time to bring him to New York, he moved over 5,000 miles to her home in the Bronx, just a 10-minute walk from Yankee Stadium. It’s a district where West Africans make up more than 11 percent of the foreign-born population. He took his soccer ball with him. He remembers the excitement of his first day in New York, heading to his new home from the airport in a car and seeing the sun cresting over a hill in the city. 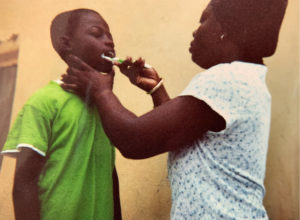 Brew as a child in Ghana, with his mom, Rebecca, during one of her visits back to the family’s home country after she had moved to New York.

“Just looking out the window, it was very sunny, the smell was different,” he said. “The whole energy was just so different. I felt like I was in paradise.”

He arrived to find that his parents had separated and he didn’t really know his younger brother, Kwabena, who only lived in Ghana for four years. The boys and their mother, who works as a nursing-home aide, occasionally speak Twi and Fante, two of Ghana’s Akan language dialects, at home. Still, Brew lost touch with other links to Ghana, like playing his beloved soccer. He faced bullying and mockery at school, for his accent and other differences from classmates.

“Just me being ‘fresh off the boat,’ you know, I felt like the easy target,” he recalled.

In addition to the bullying at in school, he was beginning to feel the weight of American stereotypes about Black boys. He begged his mom to let him go back to Ghana but couldn’t bring himself to tell her why. He found it easier to keep to himself. Then he joined a soccer team in eighth grade. It finally made the Bronx start to feel like home.

“Soccer would be the therapy I needed as I adjusted,” he told an international soccer site dedicated to building global connections through the sport, adding that the game “breaks the boundaries of what society wants you to be and allows you to be yourself amongst others who will accept you for your true identity.”

From soccer to the board

He became captain of the soccer team at University Prep Charter High School in Mott Haven. His jersey number was 21, after his birth date, March 21. Coming out of his shell motivated him to help others do the same.

“There was a small group of students that looked up to him,” said David Grigorean, Brew’s Universal Prep history teacher. “He was their captain, not only in sports, but also in their personal life—and also in school.” 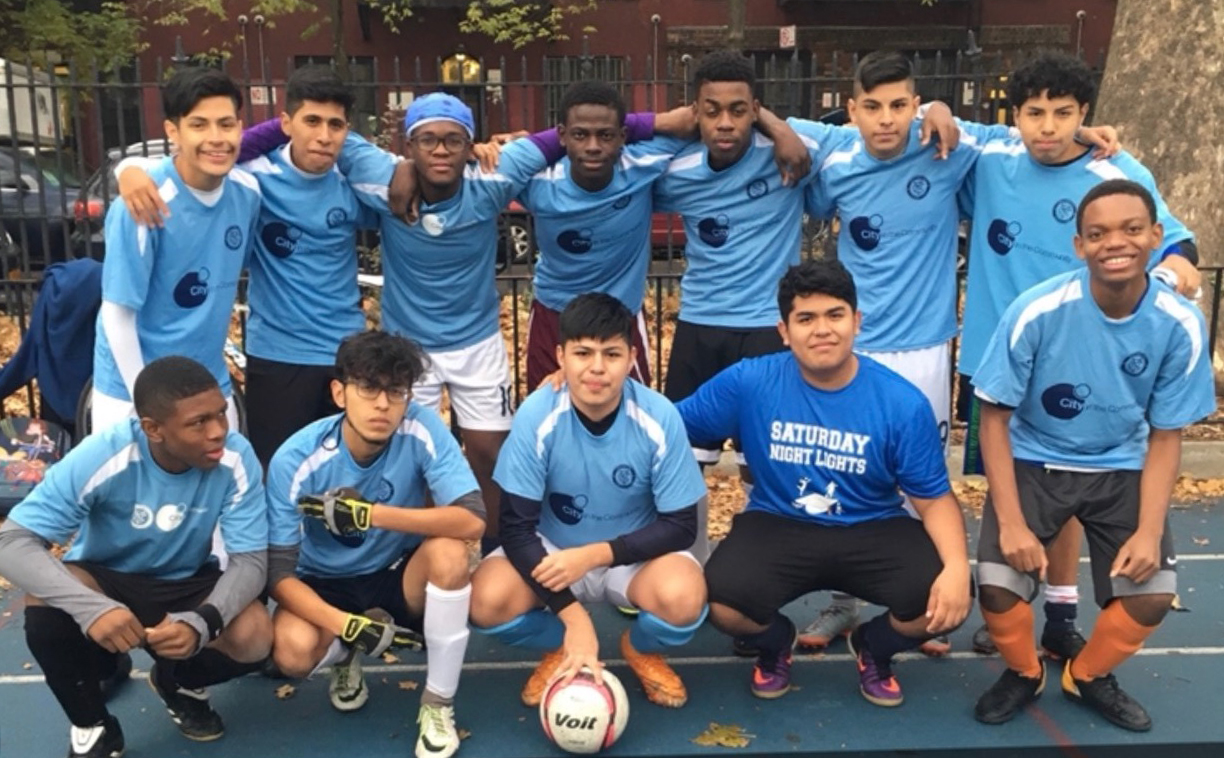 In 2016, his best friend Ramzy Djerma invited him to a soccer program in Harlem called Saturday Night Lights, run by the professional New York City Football Club. Despite an embarrassing debut in which he wore the wrong cleats, leaving him slipping and sliding on the artificial turf, he became a regular. Brew often played as a striker, the position most responsible for scoring goals. The program would present him with new opportunities, including a friendship with the executive director of NYCFC’s foundation, Paul Jeffries.

Brew was taking a course at New York University for high schoolers on soccer radio broadcasting and entrepreneurship, through a partnership with NYCFC. When he lost his glasses and started wearing a slightly beat-up pair he found in a classroom, an instructor noticed and contacted Jeffries.

“He was really trying to be resilient and resourceful and make do. So I said, ‘Look, I’ll go to the optician’s, I’ll buy you the glasses…'” Jeffries remembered. “‘You can pay them back.’” He then helped Brew find a summer job coaching with NYCFC programs so he could earn some money.

That led to a community-outreach internship with the club during Brew’s first semester of college in 2019. He successfully advocated for a Saturday Night Lights program to open up at his former high school and now works for the program—the first in the Bronx—as an assistant coach.

In 2019, he spoke to the board for Bronx District 4—which includes Mount Eden, Highbridge, West Concourse, East Concourse, Morrisania and Concourse Village—about his experiences with NYCFC in a presentation with Jeffries. Philps, the board’s district manager, was impressed by his passion, and approached him about applying for a board spot.

Community boards are filled with up to 50 volunteers from their districts. Members often seek out applicants and make recommendations to the borough presidents, whose offices make the final choices. Philps did both for Brew.

Where lines could cross

The soccer-club connection that brought Brew to the attention of the board may surface again in 2021, in a different way.

An important development facing Community Board 4 is a proposed soccer stadium for the NYCFC near Yankee Stadium. Community boards are the first stop for a rezoning application, which the stadium would require. There’s some debate over the true power of a community board’s vote, which is officially advisory-only. Boards can sway local representatives—such as in the recently proposed Industry City rezoning in Sunset Park, Brooklyn. Grassroots opposition led the community board and the local councilman to oppose the plan. Industry City ultimately withdrew its application.

The city Economic Development Corporation was friendly to the soccer stadium idea in early 2020, before the pandemic slowed plans. Supporters of the project say it will spur development, affordable housing and jobs, though data shows that such “spillover” benefits rarely materialize. As of February, Philps said the community board hasn’t had any new substantial conversations with the city or club on the stadium.

Brew said the stadium hasn’t crossed his mind as part of his board work. But his job as an assistant coach for the SNL program could create a conflict of interest if a letter of support comes before the board for a vote. Philps said members are expected to disclose potential conflicts to the board and recuse themselves from discussions and votes.

“It’s an honor system,” Philps said. “If you don’t disclose that and you do participate and someone knows that or it becomes public, then you could run the risk of being removed from the board.”

City regulations say members are “not entitled to vote on any matter that may result in a personal and direct economic gain to the member or any person or firm with whom the member is ‘Associated’,” which includes employers.

Learning to be Black in the U.S.

Brew is still sorting out his priorities on the board. He joined the Parks Committee and wants to work on restorative justice for juveniles and community relationships with the police. Back in Ghana, he never had to think about his race. In the city, it is constantly on his mind.

“My mom is always like, ‘Be careful when you go outside,’ because I’m a Black person,” he said, “It could be a problem for an officer because I have my hoodie on or have my hands in my pocket. I might look dangerous or match a profile. Being Black is sin or a crime, is what I see.” 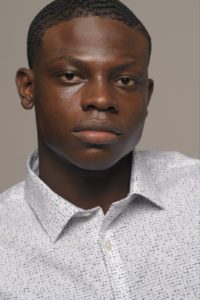 “It shouldn’t be normal for a Black person to have to be sacrificed on TV for us to go out and march,” said Brew, who joined the Occupy City Hall protest.

Brew interned with the Harlem Youth Court in high school, a program designed to train young people in developing and implementing restorative justice solutions that had real results for their peers in juvenile court. It made him realize how important it is for young people of color to understand how the criminal justice system works.

“The people in power can abuse us because we don’t know our rights,” he said.

Brew participated full-throatedly in this past summer’s uprisings against racism and police brutality. He became a regular at the Occupy City Hall demonstration, which set up camp for weeks to demand the city cut $1 billion in funding from the NYPD. Demonstrators also provided food and care for those without homes who slept in the park alongside City Hall. Brew often kept night-watch and during the day, faced off with the NYPD. In December, he and other young New Yorkers launched the Youth Alliance for Housing, a group working to amplify the voices of young people on the issue of housing as a human right.

Through it all, Brew describes feeling driven by a responsibility he feels to those who have gone before him—not only his own ancestors, but those  of Black Americans who are still fighting the same battles.

“It’s not the American Dream—it’s the ancestors’ dream. We have to live the change that our ancestors wanted,” he said. “We have to keep pushing because change doesn’t happen over 60 years, over a day. We cannot just give up or give in.”