The tools of the trade in Sophie Shao’s world haven’t changed much in hundreds of years. She calls the cello old technology, laughing about its horsehair bow and a design featuring pieces of wood glued together that really hasn’t been altered.

Shao’s main cello is from 1855. With it, she hopes to bring something very new to a free Oct. 30 performance at the BronxArtSpace studio on Governors Island.

“I’ve done my share of playing old music. I think we need to learn that,” said Shao. “But I came upon all these different composers. And I was really excited each time I found one of them.”

A native of Houston, Shao began playing the cello at 6. Today, she’s an assistant professor of cello at the University of Connecticut. She performs and competes around the world, including popular tours with her Sophie Shao and Friends ensemble.

Shao, 44, moved to the Riverdale neighborhood of the Bronx in 2016, choosing her current apartment for the ease of practicing in the soundproof living room created by a previous owner whose wife loved loud music. Shao work is supported by a $5,000 Bronx Recognizes Its Own Award (BRIO) grant as well as a $5,000 City Artist Corps grant. Her performance on Governors Island is part of her duties for both.

Shao put together a program of living composers to align with the BronxArtSpace’s mission to promote underrepresented and emerging artists.

“All these pieces need an advocate to play them so that people hear it and want to play them,” said Shao.

Working with living composers means Shao could bring these creators into her performance process. After spending more than a year with limited interaction with other musicians during the pandemic, she welcomed the chance to collaborate.

While working on “Sonata” the first piece in her program, Shao reached out to the celebrated Black composer Adolphus Hailstork through Facebook and then communicated over email. Eventually, she practiced the piece for Hailstork on Zoom, giving him the chance to offer his notes and ideas.

Shao described “Sonata” which incorporates melodies from spirituals and choral traditions, as full of character and joy. It is actually the most traditional of Shao’s choices. Still, Hailstork takes it as a given that his music is played less often than pieces in the canon.

“The repertoire is established. Pieces of new music are fringe repertoire. That’s the way it is and that’s the way it’s always been,” said Hailstork, a professor at Old Dominion University in Virginia. “First they learn the classics. Then some of them have the courage to meet with the wannabes like me.”

Many contemporary composers’ pieces are played at their premiere, and then infrequently after that, at best.

“I always hope some piece will last after I’m gone in the hands of talented people like Sophie,” said Hailstork, who is 80. “Hopefully, that one piece at least will have a future.”

Shao will follow Hailstork with “La Suite dels Ocells” by Russian-born American composer Lera Auerbach. It hadn’t been played again since its premiere in 2015. The piece is technically difficult, and full of concurrent tricky lines. Again, Shao reached out to the composer for help, sending a recording of herself playing the piece to Auerbach, who wrote back with her notes from Florida.

For her final piece, Shao returns to Chinese-American composer Tan Dun’s “Intercourse of Fire and Water,” which she used as her video submission for the BRIO award. Tan Dun’s music is the most theatrical of the bunch, almost bordering on performance art. It relies on a completely different set of less traditional techniques like drumming on the body of the instrument and rasgueado, a rapid guitar strumming technique associated with flamenco. In parts the music emulates the percussive sounds of Chinese drums and in others adopts the plucking techniques used with Chinese string instruments. Together these techniques produce explosive “fire” sections and the more fluid “water” sections.

Tan Dun, an Oscar and Grammy winner most widely known for writing the music for the 2000 film “Crouching Tiger, Hidden Dragon,” is dean of the Bard College Conservatory of Music. Shao sent Dun a video of her previously performing the piece. He responded positively but he didn’t give her specific notes.

Shao considers herself lucky to have been able to communicate with each composer. Working with living creators has its advantages. “It’s really nice to be able to work with the composer themselves and just get a ‘yay’ or ‘nay,’” said Shao. “I feel more confident having some blessing.”

Sophie Shao will perform at 3 p.m. on Oct. 30 at the BronxArtSpace’s Governors Island studio (Colonels Row 404B) surrounded by art produced by five artists in residence. Admission is free. 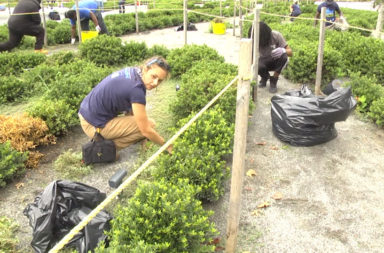 Day of Service on Governors Isle