Photos by Brianna Monsanto
STREET SIGNS: Many outdoor dining sheds have been marred by graffiti and serve up a lot of noise to the neighbors above..

The nightly routines of many West Village residents now include the sounds of dinner parties they have not been invited to.

Expansion of outdoor dining during the pandemic is sending the sounds of strangers toasting to a special occasion and couples sharing thunderous laughs straight up into their homes.

“I can’t open my windows anymore because I have an audience,” said Cheri Leone, an art director who lives above one of the many restaurants in the neighborhood.

Supporters of the city’s Open Restaurants program, initially launched as a temporary measure to help eateries survive as pandemic restrictions threatened to put many out of business, soon pushed for it to become permanent. That’s a problem for some New Yorkers, who say with the lockdown largely over, previous limits on sidewalk and curbside dining should return.

They’ve seen an increase in street trash, along with more rats and mice. The noise can become unbearable, they say, and graffiti can mar sheds built by restaurants to shield diners. 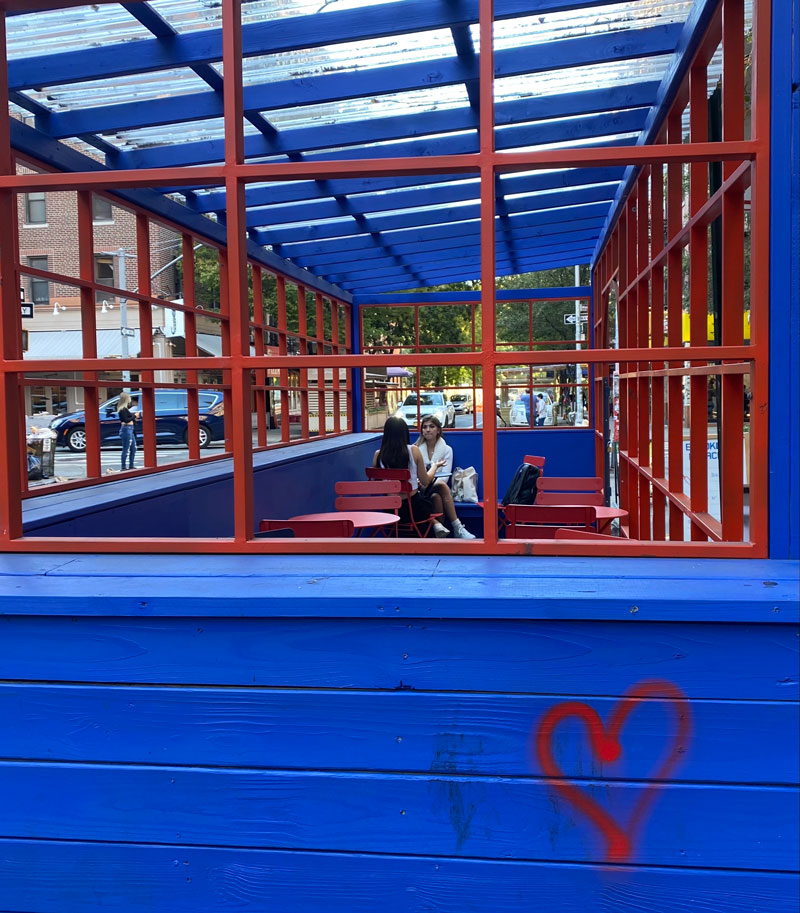 Outdoor dining sheds take up a lot of physical and mental space in a neighborhood like the West Village, critics say.

“We just want to resume our lives”

Leone is a member of the Coalition United for Equitable Urban Policy, a citywide group of neighborhood organizations and individuals seeking repeal of the law passed by the City Council that moved to make the program permanent that also want better enforcement of Open Restaurants regulations. Its petition against the program has garnered more than 1,200 signatures.

The  City Planning Commission approved a permanent Open Restaurants program on Nov. 15, returning the matter to the Council for another vote.

Critics say many streets are not well-suited for outdoor dining and the problems it brings. A lawsuit against the city brought by 23 Manhattan and Brooklyn residents calls out the city’s failure to see the “adverse effects.”

“We love restaurants. We just want to resume our lives before,” Leone said. “We just had this explosion of outdoor dining everywhere.”

She emphasized that she is not opposed to all provisions that make outdoor dining easier to offer.

“I know that restaurants need their people to dine outside and stuff,” Leone said. “But I have to be at home and work. And I don’t have a choice.”

Many of her neighbors share the coalition’s concerns. Manhattan Community Board 2, which covers the West Village, unanimously opposed making Open Restaurants permanent back in July. Residents argued that the program’s “one-size-fits-all” approach does not take into consideration the concentration of restaurants and the narrow sidewalks of the West Village.

Opponents also cite what they say is a lack of assistance from the city in regulating the program. According to the city’s record of 311 complaints, 514 about open restaurants have been filed this year in the district that includes the West Village. That’s a 13% increase from last year. 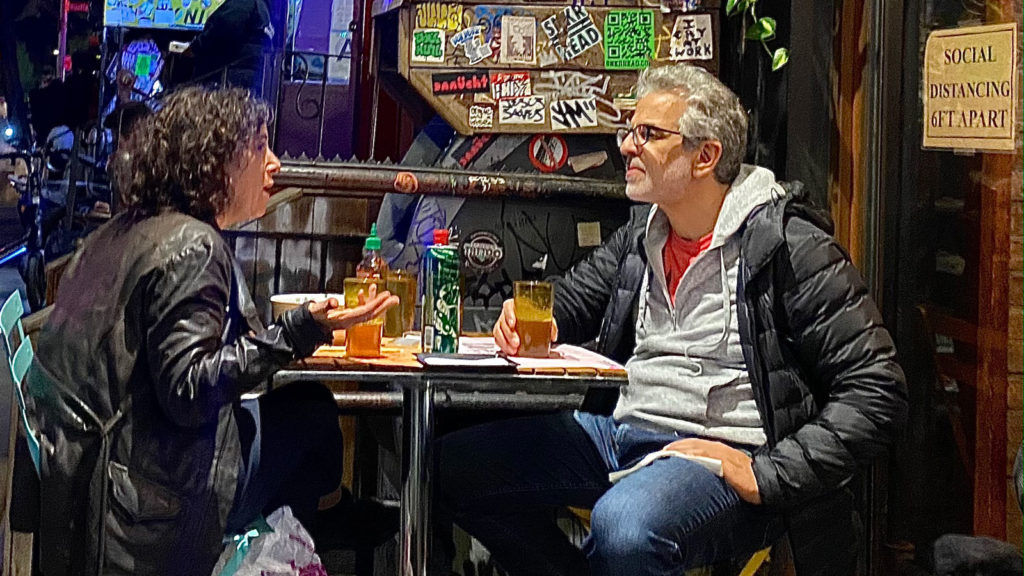 The local community board cited the West Village’s narrow streets in opposing the city’s “one-size-fits-all” approach for Open Restaurants.

“I kind of feel it on both sides”

Even restaurant owners who say the program has been a lifesaver for their businesses understand their neighbors’ concerns.

“Obviously as a restaurant owner and as a New Yorker, I kind of feel it on both sides,” said Alex Chow of 5ive Spice Tacos & Banh Mi on Mulberry Street.

He said being able to build an outside enclosure allowed him to hire back his entire staff of about 20 employees. His added costs include trying to keep up with the competition.

“You see everyone reviving their sheds to be the next best place to go to,” he said.  “With supply and demand, it drives up [the cost of] all the contracts and labor.” 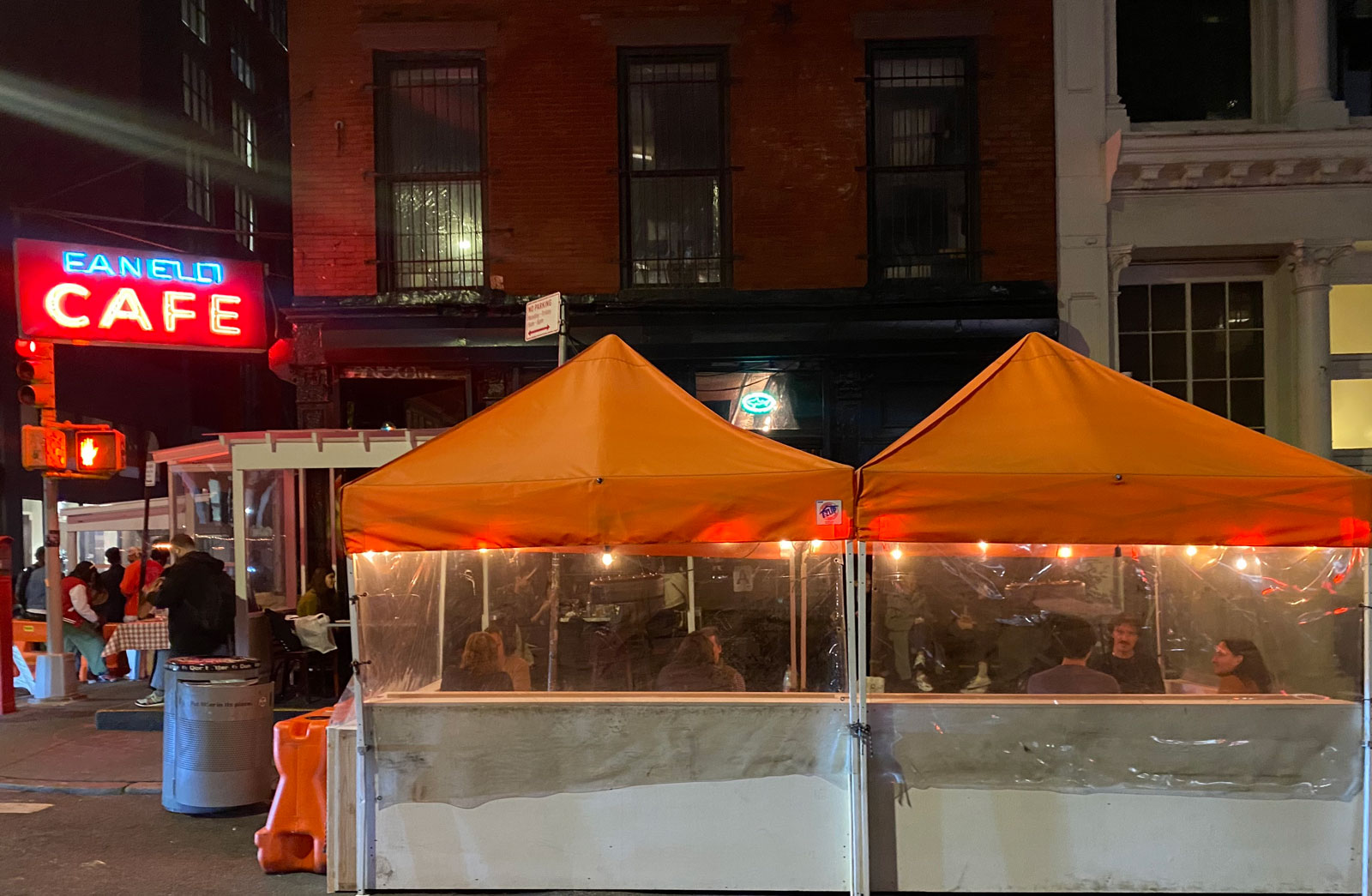 Chow, who calculates menu prices to ensure a return on the new costs, said that he relies heavily on the additional customers he can now serve. That brings more problems to a restaurant-heavy neighborhood.

“We are always trying to one up each other. From fancy lighting, to outdoor music…it does create more pollution. Noise and air pollution,” Chow said.

He acknowledged the city faced trash and rodent problems that needed to be addressed even before street dining limits were lifted.

Some New Yorkers see other flaws in the expansion of outdoor dining.

“There’s no way they’re measuring out for wheelchairs being able to get by,” said Raq Massey of Brooklyn while visiting Washington Square Park.

Others feel enclosed outdoor dining may not always be as safe as it is touted to be. 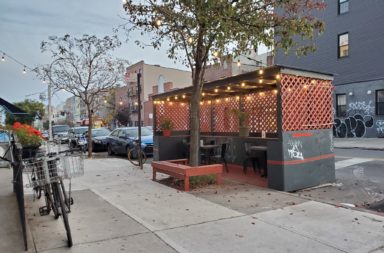