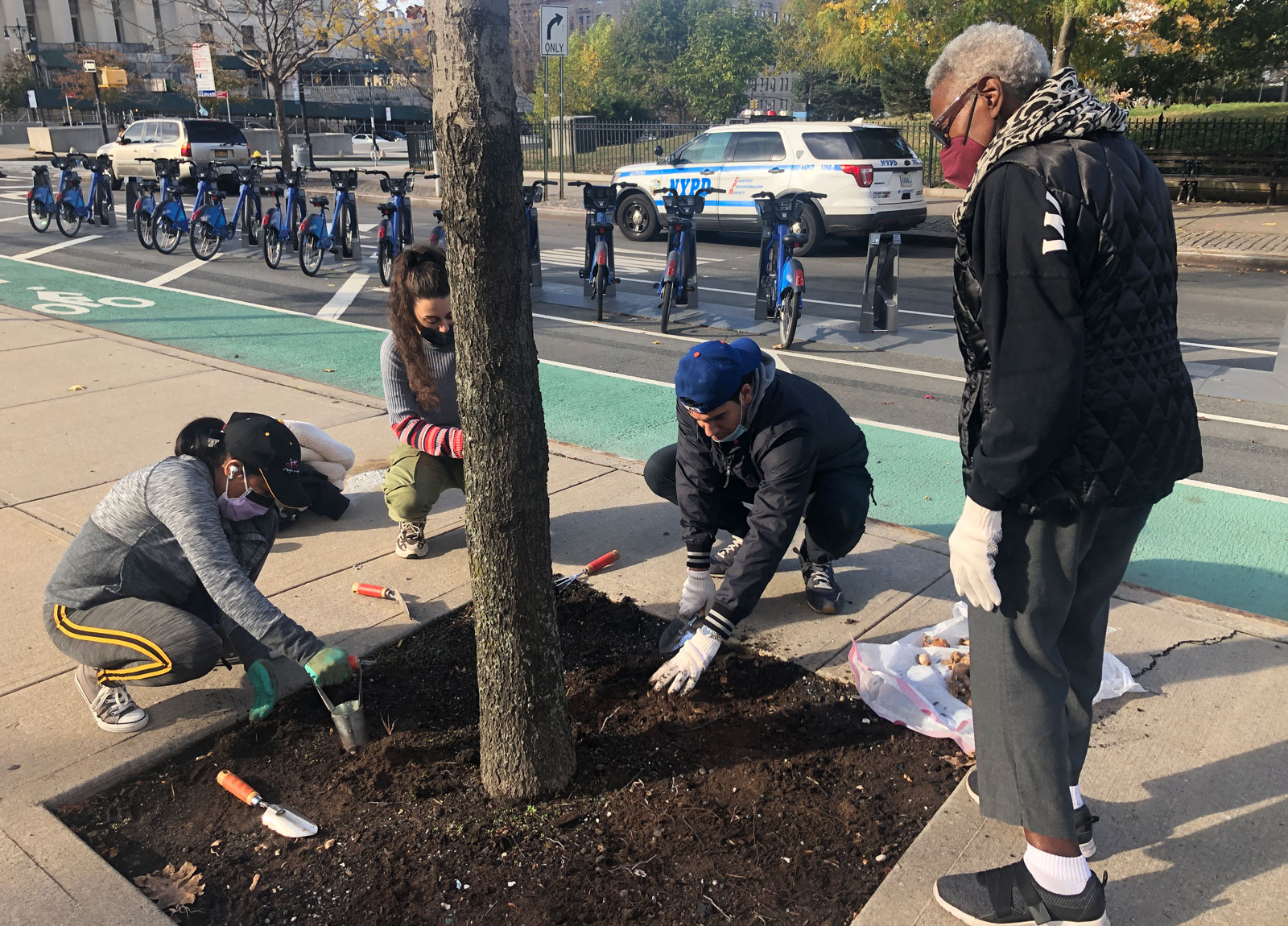 DIGGING TOGETHER: Joyce Hogi of Friends of 4 Parks Alliance watches fellow volunteers plant daffodil bulbs in the 161st Street medians at the event she helped organize. (Photos by Monique Mulima)

BRONX — As Joyce Hogi walks down the Grand Concourse on a Saturday morning, she is stopped along the way by people who know her from around the neighborhood where she has lived most of her life.

One is a young man she has seen grow up, another is a woman whose husband does community work with Hogi. Some affectionately call her “Ms. Joyce” as they greet her.

Hogi, 78, is on her way to a planting event for the Friends of 4 Parks Alliance, a local group she helped found.

“I’m a community activist,” says Hogi, who has lived in the Concourse and Highbridge sections for more than 40 years. “I like being involved in the community where I live to make it look nice.”

Friends of 4 Parks was created five years ago by Bronxites who saw hat four parks in Concourse and Highbridge—Joyce Kilmer, Franz Sigel, Macombs Dam and Mullaly—were not being maintained well.

The alliance, which organizes cleanups, educational programming and plantings, relies on individual donations and grants. In September, it received a $3,000 grant from the City Parks Foundation’s NYC Green Relief & Recovery Fund.

Hogi, who is on the Friends board, retired in 2015 from her job as a secretary at a Catholic boys school just down the street from her 161st Street apartment. She is also a board member for the Bronx Council for Environmental Quality and a Bronx Museum trustee.

“I keep busier than I want to be,” she says. 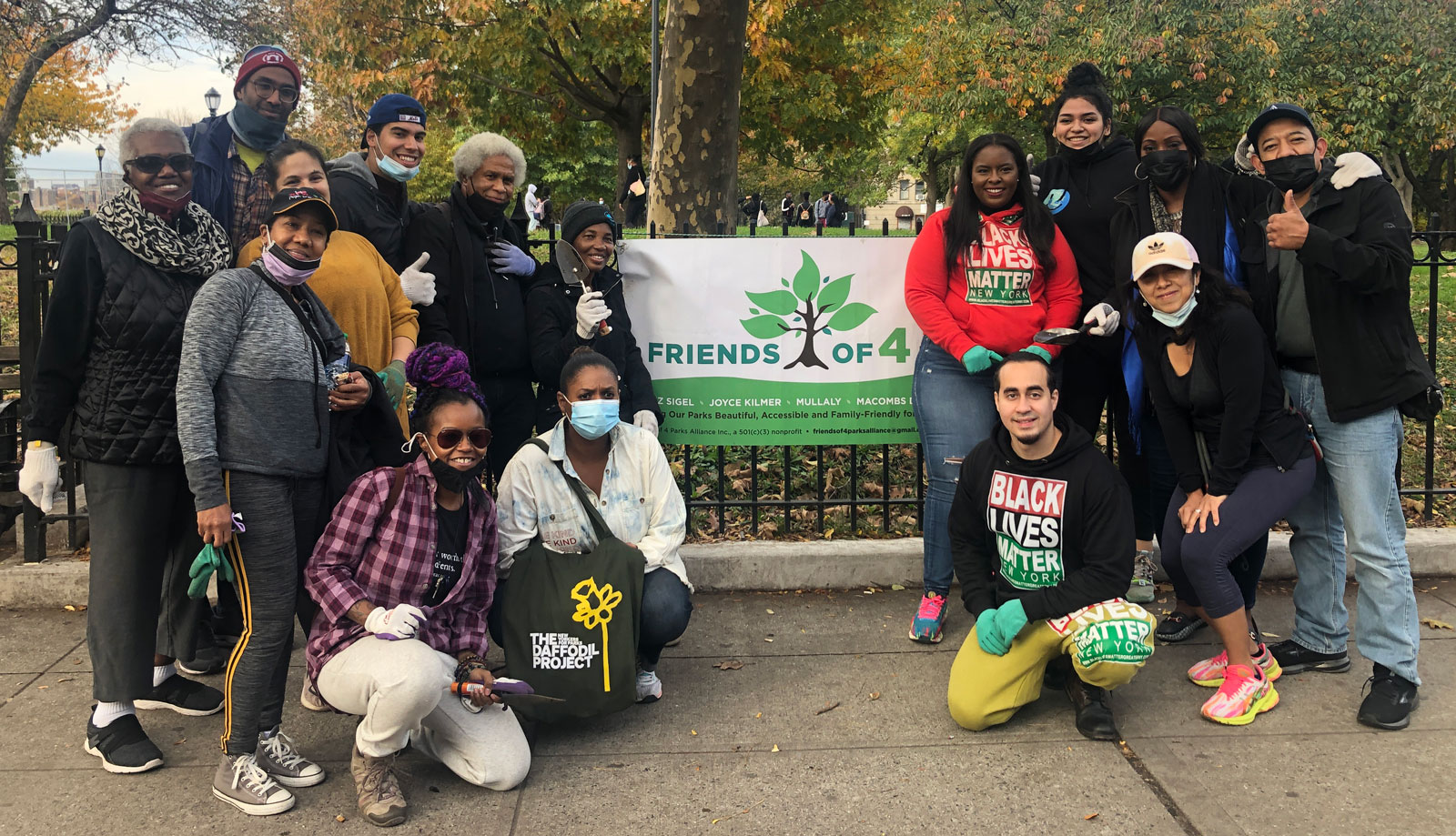 “I ordered this weather just for us,” says Joyce Hogi, left, with volunteers, elected officials and advocates at The Daffodil Project event carried put by the Friends of 4 Parks Alliance and New Yorkers for Parks.

“We want a profusion of blooms”

For Friends of 4 Parks, Hogi helps coordinate events such as the group’s participation in The Daffodil Project, the citywide plantings organized by the nonprofit New Yorkers for Parks.

Sunny weather make the fall event feel more like spring as volunteers plant daffodil bulbs around the trees in the medians on 161st Street.

“I ordered this weather just for us,” Hogi says.

Flowers will bloom across the city in spring as part of the largest living memorial to 9/11 victims.

“It will be beautiful,” says Hogi. “We want a profusion of blooms.”

Hogi carries a clipboard to check in more than a dozen volunteers and hands out masks to people who needed them. They are joined by  representatives from Black Lives Matter New York, Assemb. Amanda Septimo (D-Bronx) and Bronx Borough President-elect Vanessa Gibson.

This is Hogi’s first in-person event since the start of the pandemic. “I lean more towards programming than cleaning,” says Hogi, who was director of events operations for the American Kennel Club for 14 years.

The Friends of 4 Parks Alliance cleanup events draw as many as 40 volunteers, Hogi says. Groups like the alliance are crucial to the fight to maintain, improve and get funding for green spaces, says Sherrise Palomino, director of advocacy programs at New Yorkers for Parks, who was co-hosting the daffodil event.

“The goal is to get 1% of funding from the New York City budget,” she says. “Currently the funding is half of 1%.”

In 2020, the cash-strapped city reduced parks funding by $84 million. That funding has since been restored to about $620 million of the city’s almost $100 billion budget—still far short of the $1 billion advocates say would be adequate.

Raising the parks budget would also reduce the need for communities to rely on the goodwill of volunteers.

After all of the bulbs are planted and the volunteers pose for group photos, several ask Hogi if they can help her carry her tools and a few leftover boxes of granola bars. She eventually gives in and lets one push her shopping cart back to her building.

Next spring, the Friends hope to resume yoga and other events in the parks next year. Hogi is most excited about the possible return of the summer Thursdays jazz performance series in Franz Sigel Park.

“They were my favorite,” she says. “Those have been very nice.” 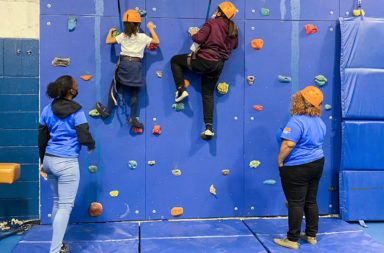 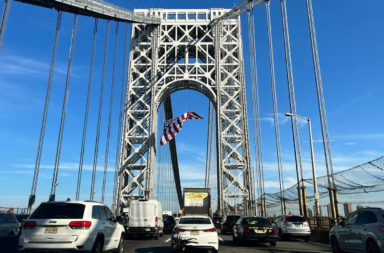