Phil Caracci was tired but exhilarated on the morning of the election.
“I checked my last email at 2 a.m. and woke up at 4:30 this morning,” he said. “I’m excited that this day is here, but I’m looking forward to sleeping tomorrow.”

Caracci runs McCain Manhattan, an all-volunteer organization that has mobilized New Yorkers to get out the vote for John McCain. The morning of the election, Caracci and a few hundred McCain supporters gathered in front of ABC Studios in Times Square for one final rally before the election is decided.

“Good Morning America” invited both McCain and Obama supporters to come out for their candidates. McCain enthusiasts far outnumbered those holding Obama signs.

“I just feel we have the momentum, I mean right here in Manhattan we won on this piece of rock,” Caracci said. “This is our traffic island, so it’s very exciting.”

Ed Cox, the chairman for the McCain campaign in New York, said the Times Square rally was the culmination of the volunteers’ work.

“We’ve have had a great time fighting for every vote here in New York State,” he said. “Also we’ve been telephoning across the country, helping in Pennsylvania and Ohio, and it’s just been a great race.”

Some Manhattan McCain campaigners called undecided voters in swing states. Others got on buses to help sway voters in Pennsylvania.

At the rally, many New York Republicans remained hopeful despite the forecast Obama victory.

“It’s getting really close, and I think people will really come out in the end for McCain,” said New York resident Cecile Dacudau, who was comforted by the turnout in a city where Democrats outnumber Republicans 5 to 1. “ I post things about him on my Facebook and people give me a hard time for it. People in this city think you’re nuts to be voting for McCain,” she said. 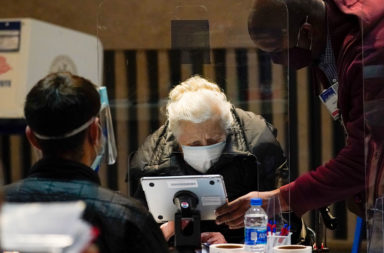 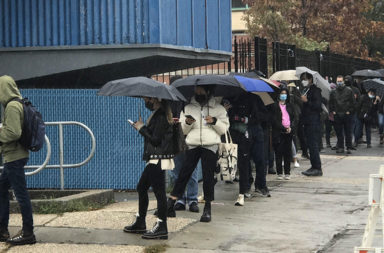 The Line on Early Voting