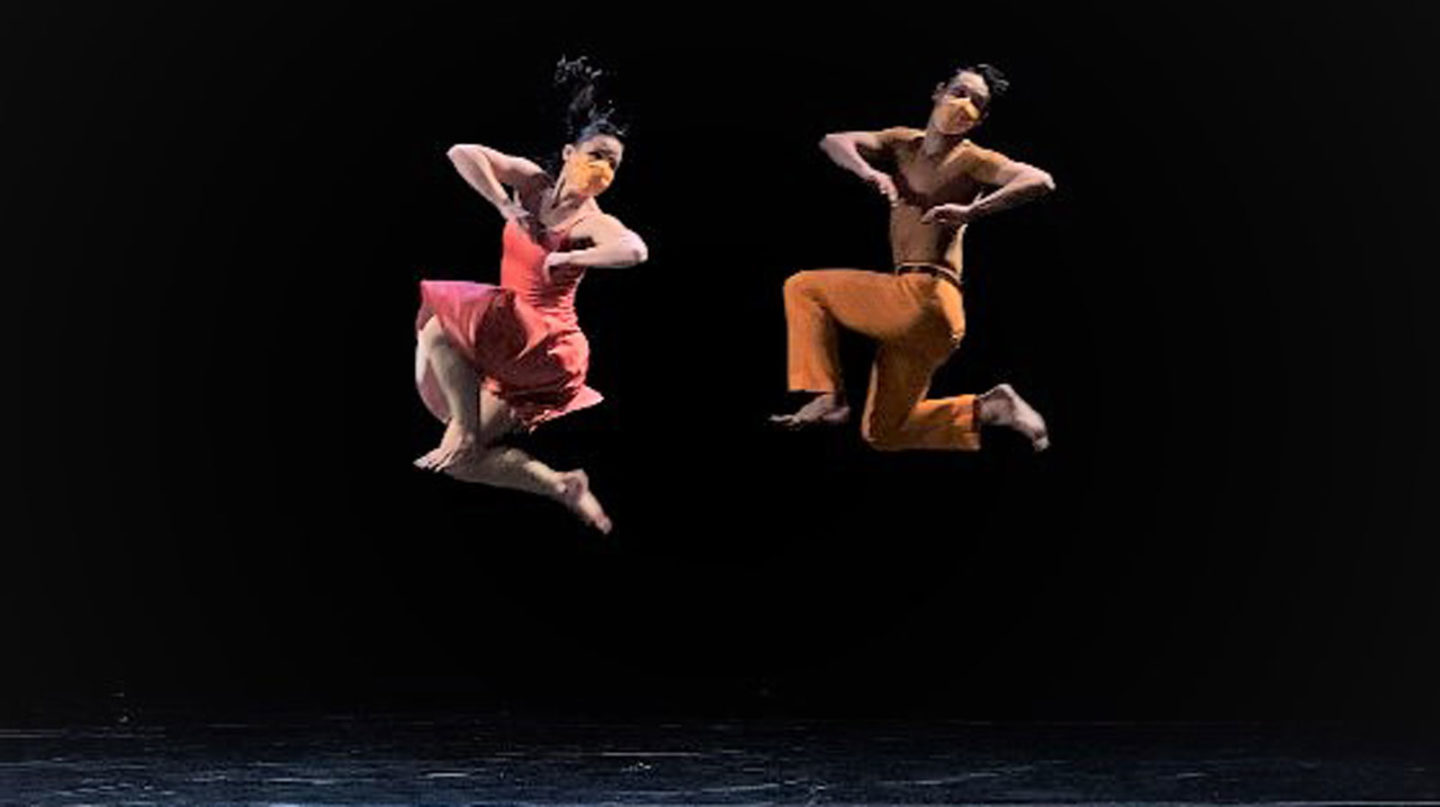 BACK UP: Eran Bugge and John Harnage, in Paul Taylor's "Esplanade."

MANHATTAN — The vibrant pinks and oranges worn by Paul Taylor Dance Company performers as they sprint from wing to wing and catapult through the air during his masterwork “Esplanade” also splash across their faces, now that protective masks are part of their costumes. 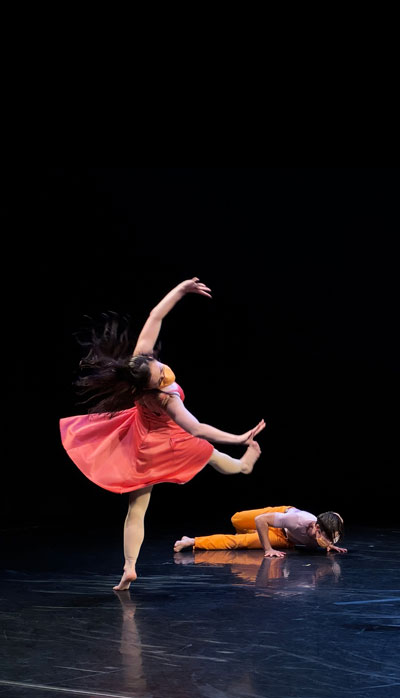 The face coverings are one of the concessions to the pandemic that has accompanied the iconic modern-dance company’s return to the stage. The masks don’t detract from the athleticism and artistry of the late Taylor’s legendary work, dancers say.

They can even enhance the expression of his signature style. Taylor was “a very expressive choreographer with the torso, which is a very important part—using all of your back. And the back can really tell people how you’re feeling,” says Christina Lynch Markham, who has been with the company since 2013. “When we’re wearing a mask, we can still emote using our body, which is what Mr. Taylor’s choreography is. He’s a master at that.”

At 8 p.m. on Nov. 19, dance lovers will once again be able to see the company when it presents Modern Is Now: Stories of Our Future, a free livestream benefit featuring archival footage, celebrity guests, and pre-filmed Taylor classics such as “Esplanade” and “Cloven Kingdom.” The production will offer the audience some advantages over an in-person performance, with videographers providing new, close-up perspectives.

The company, whose rigorously rehearsed dancers had constantly toured the globe, was forced to halt operation because of the pandemic—until eight weeks ago.

“You have to get rid of the aches and pains from sitting around for seven months,” says Markham. “But then once that goes away, you’re like, ‘Oh, this is what I was born to do, what I’m meant to do,’ and people need to see it.” 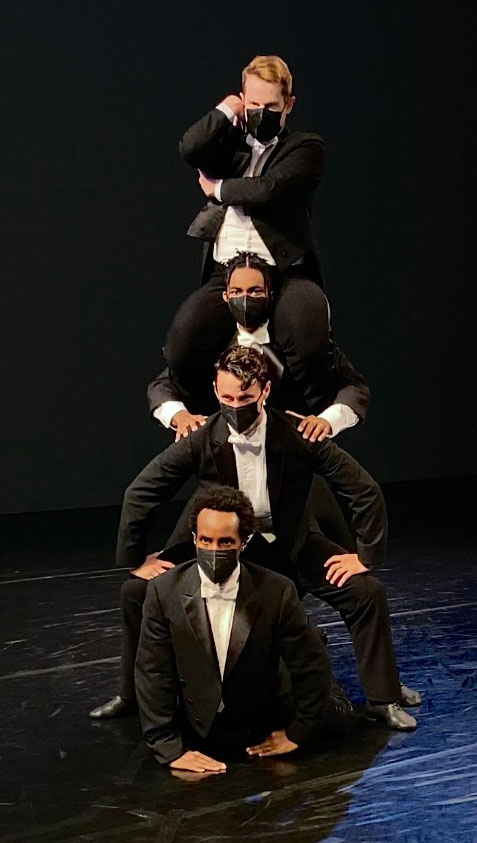 The dancers returned to rehearsing in person for the performance, but their Lower East Side studio operates much differently than it did pre-COVID. Dancers—along with members of their households—are required to get tested twice weekly.

Performers, staff and crew members wear masks indoors at all times and consume water or snacks outdoors. Studio windows are left open at all times for ventilation.To limit the number of people in the studio at any one time, dancers rehearse in two groups of six, rather than the company’s typical cast of 16. There are never more than eight people in the space, between the dancers, the rehearsal director and an occasional appearance by mentor Bettie de Jong.

“We are actually not social distancing when we’re dancing. We’re just wearing our KN95s,” says Markham, referring to the protective masks. “And being very protective. You know, cleaning ourselves after we touch, from section to section.”

Contact can’t be avoided in Paul Taylor dance. In “Cloven Kingdom,” for instance, men in matching tuxedos cartwheel over one another and climb onto each other’s shoulders. Huge portions of the piece’s extreme aerobics are performed with arms linked or dancers physically manipulating one another like puppets.

For the benefit performance, Laura Halzack, the company’s director of social media and digital content, joined as co-director and contributing videographer for the evening’s “Esplanade” performance.

“What was exciting for me as a former dancer in the company—who really misses being close to the dances and inside the dances—getting to film them from this very intimate perspective was truly thrilling,” says Halzack. “I felt like I was dancing again.”

While Taylor’s works have traditionally been performed on a proscenium stage, the company is excited to take the camera—and the audience—behind the scenes. 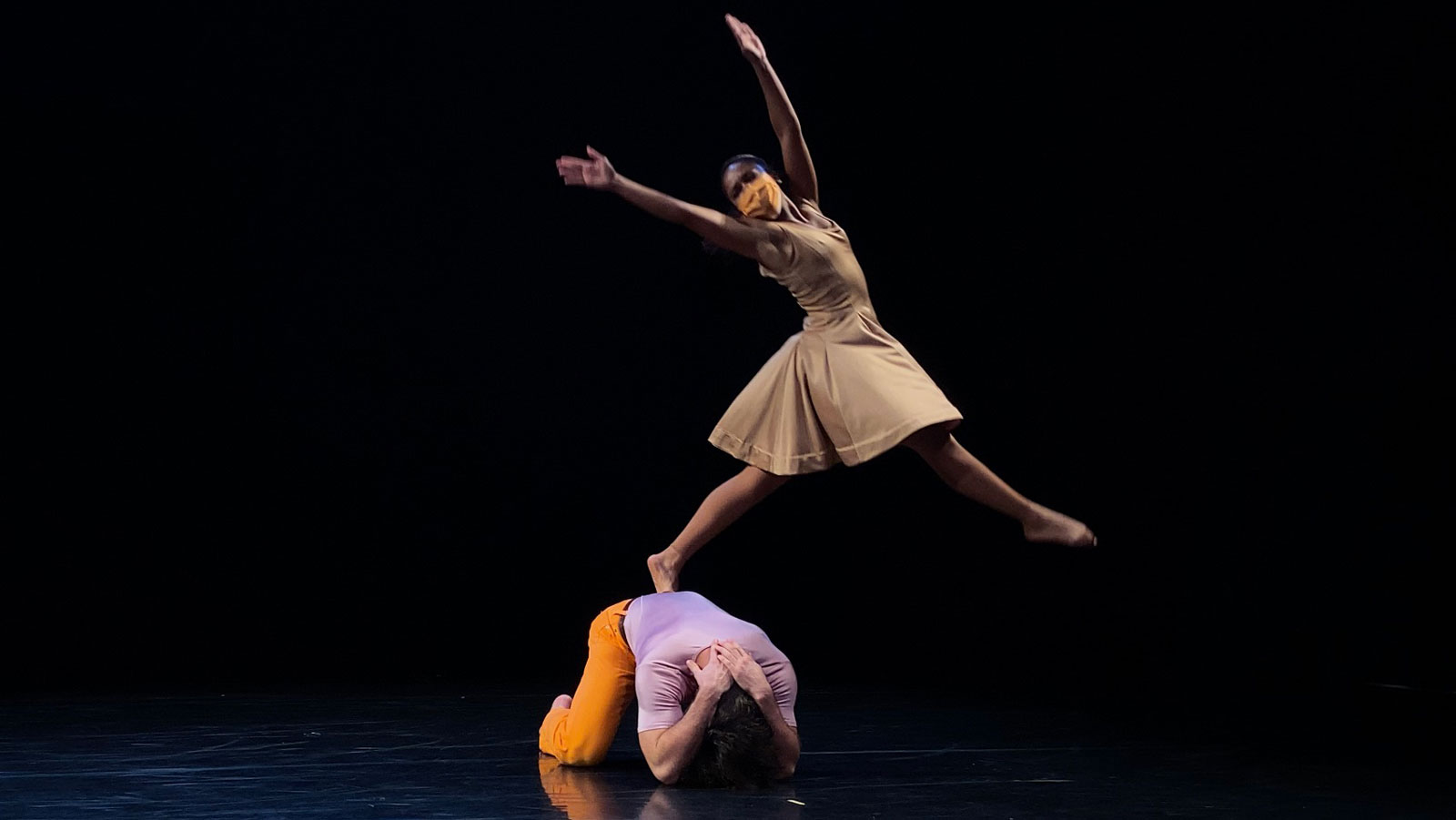 “We’re thinking outside of the box on how to capture the image…We’re taking the movement and we’re splicing it. We have the ability to have cameras now on the floor. So, when we’re doing a jump, the audience member can actually be inside the dance versus viewing it from the fourth wall,” Markham says. “Sometimes, you need a big barrier in order to think above and beyond—to come up with creative content.”

Halzack agrees that the digital performance will give the audience an experience that “will be even closer to the humanity of the work. You see it when it’s on stage, but I think what’s being offered during this show is almost a dancer’s perspective. I think the audience gets to see what we see from our peers, and our colleagues almost from the side of the stage every single night…It’s just alive.”

“You see all of the dancers up close,” Markham says. “You get to get an idea of ‘Oh, this is just a regular person.’ And that’s what Paul loved. He loved hiring regular people that did extraordinary things under lights and costumes and makeup. I really like the humanity that this virtual gala will show to everybody.”

In addition to creating a more intimate viewing experience, the virtual performance allows the company to reach a wider audience—and encourage benefit viewers to support its work as patrons.

“I think people are missing art,” Markham says. “And because we’re offering this for free, it’s opening up a floodgate of up-and-coming new, young dancers that we can inspire.”

Tickets for Modern Is Now: Stories of Our Future can be reserved here 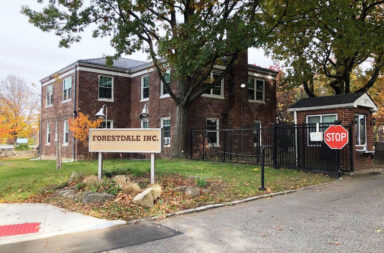 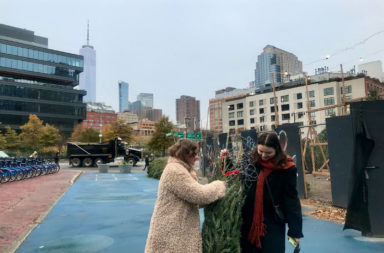