Supporters of jailed Russian oil tycoon Mikhail Khodorkovsky gathered in Times Square on Tuesday to mark eight years since his arrest and imprisonment. Similar demonstrations were held in Washington and Europe to raise awareness of a case that has become a symbol of Russian corruption for some Kremlin opponents.

At noon, a dozen or so protesters formed a line on Seventh Avenue, holding “Free Khodorkovsky” signs and answering questions for the few passers-by that stopped to chat. The demonstrators included Khodorkovsky’s former wife, Helen, a Russian-American political blogger and a handful of Russian ex-pats. They represent a small but growing group of activists in New York working to raise awareness about this case and the general state of Russian politics as elections loom.

“When it comes to the concept of justice, it is a very symbolic case,” said Natalia Pelevine, a Russian activist based in New Jersey. “Of course, we are trying to help others, those who are not as well known who are in the same position as Khodorkovsky, but Khodorkovsky is a symbol because it is a very well known case worldwide.”

Pelevine is the co-founder of the Democratic Russia Committee, a grassroots political group that planned the U.S demonstrations along with The Institute for Modern Russia, an organization headed by Khodorkovsky’s son and lawyer. Protesters also had the assistance of Rubenstein Public Relations, which sent a press release to media and distributed T-shirts to participants.

The anniversary comes at a key time for political activists who oppose Russia’s ruling party. The opponents recently ramped up protest efforts following Vladimir Putin’s announcement that he will run for president again this spring. Khodorkovsky clashed with Putin during his last presidency.

Khodorkovsky was Russia’s wealthiest man when he and his business partner, Platon Lebedev, were arrested in 2003 on charges of tax evasion and embezzlement. He was sentenced in 2005 to eight years in prison. A second conviction for money laundering extended their sentence to 2017.

This past May, Khodorkovsky and Lebedev lost an appeal to overturn the second sentence, but were granted a one-year reduction. They are set to be released in 2016.

At the time of his arrest, Khodorkovsky had become increasingly politically active. Critics of Putin’s government believe the businessman was targeted for his politics rather than his crimes. Following the failed appeals case in May, Amnesty International declared Khodorkovsky and Lebedev prisoners of conscious, citing the flawed and politically motivated nature of the second trial.

Khodorkovsky’s son, Pavel, helped plan the Times Square demonstration. He has been living in the United States for the duration of his father’s imprisonment and has become politically active.

“My attitude towards Russian politics is disgust,” the younger Khodorkovsky wrote in an email. “Activism in Russia is infrequent because dissenters are forcefully suppressed by the state. People are afraid to voice their opinion, take a stand.”

He said demonstrations like the one in Times Square are important because they show solidarity with activists in Russia and expose an American audience to their cause.

But Russia expert Stephen Cohen warned that using Mikhail Khodorkovsky as a political symbol might backfire on supporters.

“They [Russian authorities] don’t want to be seen as bowing to foreign demonstrations or threats by the American congress, ” said Cohen, an NYU professor. “There is no compelling reason at home to release him, therefore the reason has to come from abroad and it isn’t going to come from the streets.”

While Cohen believes behind-the-scenes pressure from politicians and businessmen probably would be more effective for his release, Khodorkovsky’s supporters plan to continue advocating for him in public.

“I hope that maybe, many of them [passers-by] have heard about Khodorkovsky, but maybe they don’t know that he is still in jail, eight years, it’s a very long time,” said Mona Zabelina, one of the Times Square protesters and the wife of an exiled business associate of Khodorkovsky’s in Russia. “I hope that they remember that it’s still going on in Russia.” 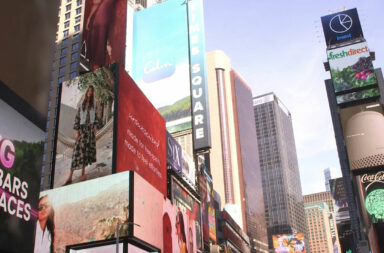 New Weapon for the City