Photos/Sarah Kerson
SEE THIS: A sign from a Columbia student workers' picket line at the university’s medical campus, where strikers stated their demands for wage increases and dental and vision coverage.

Sam Stella’s 3-year-old son has never been to the dentist.

Louie was born just before his father began his doctorate in religion at Columbia University, where about 3,000 members of the United Auto Workers Local 2110 have been on strike for more than two weeks.

Teaching and research assistants represented by the union are demanding increases in pay and benefits, including dental and vision insurance.

“When the doctor’s like, ‘What did the dentist say?’ we say, ‘Well, we’re still looking at what affordable options there are,’” said Stella, a teaching assistant who earns an annual stipend of about $31,000. He and his family receive medical insurance through Columbia, though Stella said the plan is inferior to what his wife and son received through her former employer. 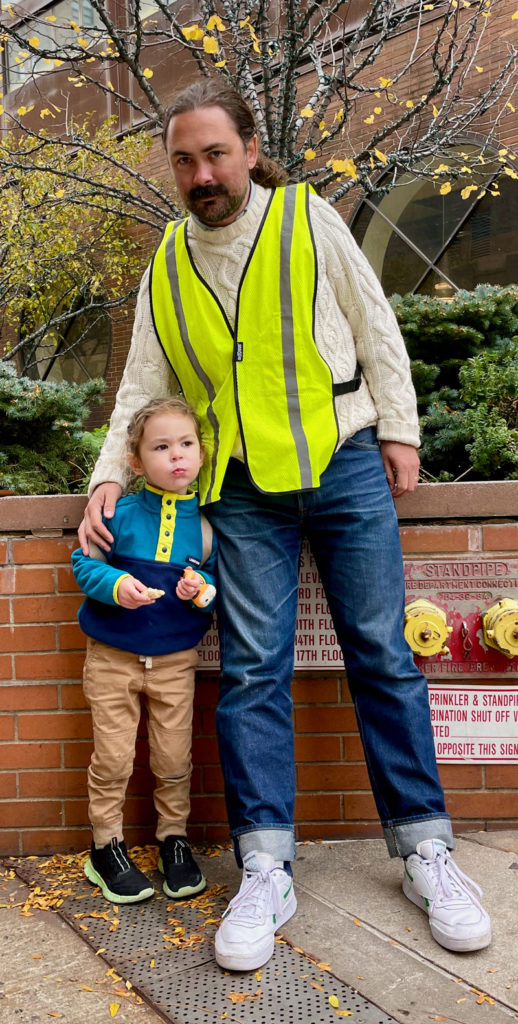 Sam Stella, a doctoral student in Columbia’s religion department, who took Louie, his 3-year-old son to the demonstration, said his family struggles to make ends meet because his teaching stipend and the university child-care allowance are too low. (Courtesy May Ling Stella)

Stella, 33, joined the picket line Nov. 11 at the Columbia University Medical Center in Washington Heights. This is the union’s second strike this year and the fourth in four years. The walkout that started Nov. 3 followed a strike in March after which the bargaining committee reached a tentative agreement with the university that was set to last three years.

Members voted down the agreement, saying it failed to meet the union’s core demands. The union has continued to bargain with the university through this strike, the most recent development in a contentious, years-long battle between student workers and the university. In 2016, a National Labor Relations Board decision regarding the Columbia union cleared the way for graduate students at private institutions to unionize.

“This time, we’re asking for more,” said Gloria Graf, 28, a doctoral student in epidemiology who is a research assistant. The previous agreement offered to increase the pay to up to $42,350 annually for teaching and research assistants. Graf said the increase did not account for inflation. “We were essentially taking a pay cut.” 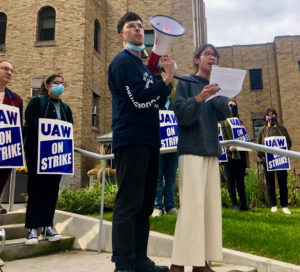 The union wants a $45,000 salary for 12-month doctoral-student workers, what the Massachusetts Institute of Technology considers a living wage in Manhattan, and a $26 wage for hourly workers. New York University graduate students, who are also UAW members and ratified their contract this spring, won a $26 minimum.

Union members at Columbia, who have complained of late paychecks and inconsistent pay levels across the university, are also seeking independent arbitration in cases alleging discrimination and harassment.

“The school functions because of us”

Core to the dispute is the size of the bargaining unit. The tentative agreement reached in the spring did not include “casual” and “hourly” employees working less than 15 hours a week. Union members say this goes against the NLRB’s decision, which granted membership to all student workers–including undergraduates–who provide “instructional services” such as teaching and research assistants.

In response to a request for comment on the union’s demands, Columbia spokesperson Caroline Adelman pointed to a section of the provost’s website that promotes the university’s positions on unionization.

“The strike is unnecessary,” reads a bargaining update for faculty dated Nov. 11. “The union claims that the university is clinging to the tentative agreement, that only a strike can make us realize we have to make new concessions. That assertion is entirely wrong.”

Adelman did not respond to followup questions. According to the Columbia site, the tentative agreement established a $200,000 fund for student workers to apply for reimbursement for out-of-pocket medical expenses. The fund was set to increase by $25,000 for each year of the agreement. The union is asking for a $300,000 pool that it controls. 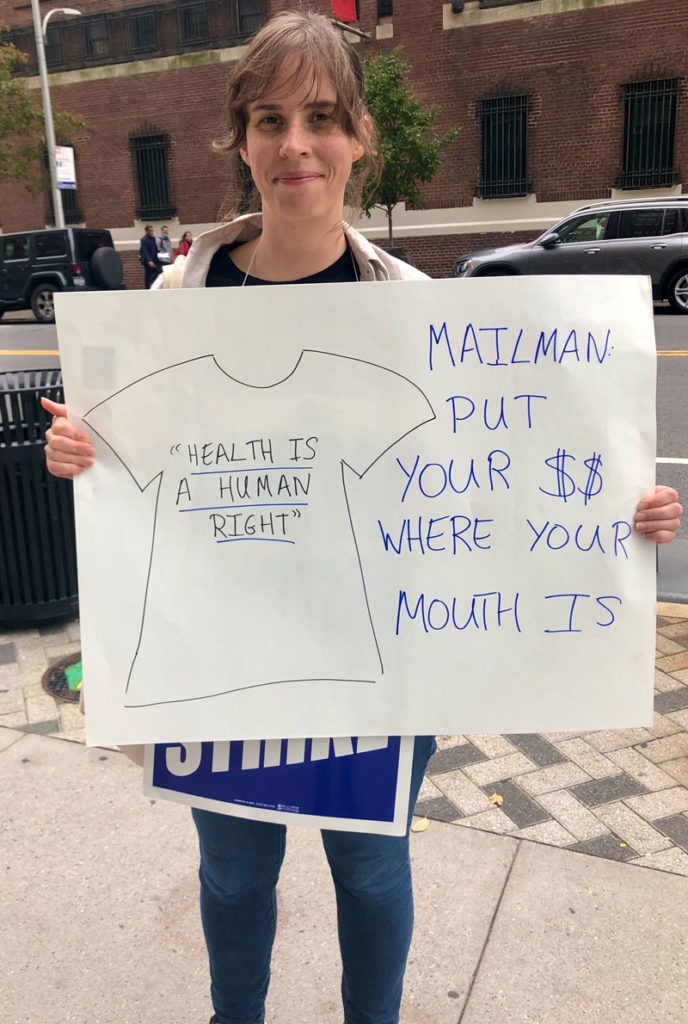 Striking teaching and research assistants see Columbia’s stated support of access to healthcare as hypocritical when it comes to their benefits, as Alexanne Neff, a master’s student at the Mailman School of Public Health, shows in a sign depicting a T-shirt the school sells.

Some undergraduate students have rallied in support of the union, even though they could be at risk of losing credit hours if the strike continues.

New York State Department of Education accreditation rules require courses to include a minimum number of instructional hours. As the strike rounds its third week, students are at risk of not completing that class time. Johanna King-Slutzy, a third-year doctoral student in English and comparative literature, estimated that 1,000 undergraduates have been affected by cancelled classes. King-Slutzky is the sole instructor for a writing class that is a required undergraduate course and has been cancelled by the strike.

“I have many of the same responsibilities as a bona fide faculty member,” she said.

The union has organized undergraduates to write to the DOE, asking that the department “hold Columbia University accountable for its failure to deliver [their] education.” King-Slutzky said after the strike in the spring, the university asked graduate instructors to sign a document indicating they had made up classroom work so that students would not lose credits.

As the picket carried on, Stella sat to the side with his son, who played with a toy race car while student workers’ chants echoed across the medical campus. Louie’s school was closed for Veterans Day, and his mother had to work.

The tentative agreement would have increased the university’s child-care stipend from $2,000 to $4,000. Graduate students at Brown University, who ratified their contract in May, won a $5,000 per child stipend for up to $15,000 per family. Stella said he was paying $20,000 a year for child care before Louie qualified for the city’s free preschool program.

“Two thousand dollars a year for child care is the biggest joke of them all…” Stella said. “That’s maybe two weeks at a day care in New York.” Tuition at Columbia’s own Affiliated Early Learning Centers ranges from $9,050 to $38,000.

At the beginning of the pandemic, Stella’s wife was laid off from a nonprofit matching young international workers with domestic employers. She’s now returned to working part time for a small importing company.

Stella, who did his master’s at Yale, said he chose Columbia in part because he wanted his son to experience New York City’s wide-ranging culture, “which we thought was a really unique opportunity for a kid. And if it weren’t for that, I would not be here.” 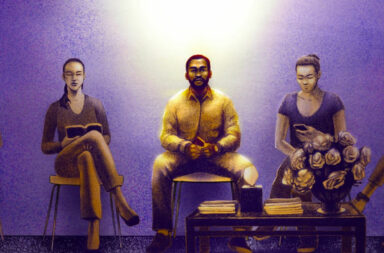 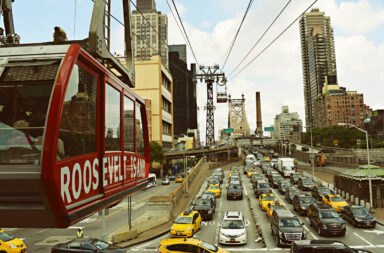