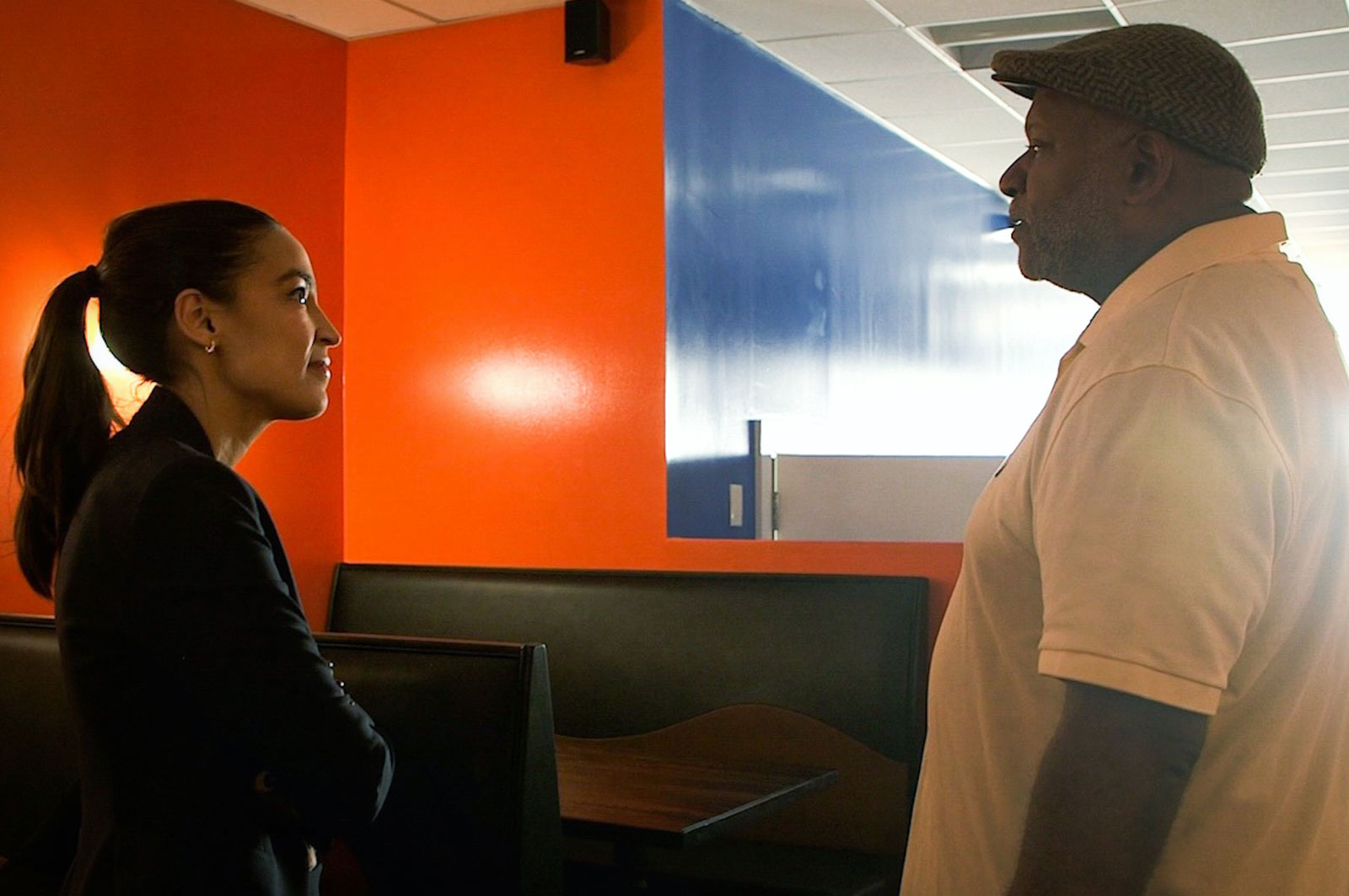 STOP HATE: “We have to lose the ignorance,” Darryl Lelie told Rep. Alexandria Ocasio-Cortez before the rally outside Seafood Kingz, the City Island Avenue restaurant he co-owns with son Derrel that was among the businesses that received racist hate mail. (Photos/Christian Colón)

“No place is immune, no community is immune,” Ocasio-Cortez, a Democrat representing parts of the Bronx and Queens, told the NYCity News Service after the afternoon rally attended by about 30 people. “And that’s why we have to be so vigilant when these things happen, so that we squash it early and don’t let it grow.”

The harassment aimed at businesses owned by Black, Jewish and Mexican restaurateurs came to light when Derell Lelie—who owns Seafood Kingz on City Island Avenue with his father, Darryl—posted the first images on social media and contacted news outlets earlier this month.

Then on Nov. 10, Seafood Kingz received more hate mail. “The Nazi party has resurrected and we have agents everywhere,” said the letter, which also included a drawing of a swastika and additional racial slurs.

This spurred Derell Lelie to organize the rally, with help from the office of State Sen. Kevin Parker (D-Brooklyn). Ocasio-Cortez told the gathering of customers of the restaurants, City Island residents and people from other parts of the Bronx and the city that Congress needs to address a nationwide spike in hate crimes.

“We have raised to be passed a domestic and anti-domestic terrorism bill to increase a reporting of hate crimes across this country,” she said. “We are pressing for incidents like these to be measured. Because without the data it’s hard to track the trend.”

City Island, home to about 4,000 people, is about 60% white, 25% Hispanic and less than 5% Black. Darryl Lelie, who grew up elsewhere in the Bronx, remembers being harassed by white residents as a teenager while riding his bike on City Island in the 1980s.

“We were dismayed by the flyers that were sent to these businesses and we are supporting the businesses in every way we can,” said Paul Klein, a local jewelry store owner who is president of the City Island Chamber of Commerce, in a phone interview.

Trouble from the start

Derell Lelie says he and his father heard racial slurs from passersby just after they began serving customers in February. Eight months later, things only got worse at what is thought to be City  Island’s first and only Black-owned seafood restaurant.

In late October, they were mailed the first racist images, which showed a Black man carrying a gun and a Jewish man depicted as a landlord holding a rent hike sign. After posting about it on Instagram, they learned that three other City Island restaurants—Archie’s Tap & Table, Caliente’s and Little Frida’s Eatery—had received the same drawings.

Derell Lelie reported the hate mail to the police and contacted news outlets including News 12 Bronx. He then decided to organize the rally.

Just 48 hours before the Nov. 12 event, he received a second letter, calling him “subhuman” for alerting news organizations.

“We’re going to come together as a community of restaurants on this island—Italian, Jewish, Spanish, Chinese, Black—and we are going to continue to strive,” Lelie told the News Service. 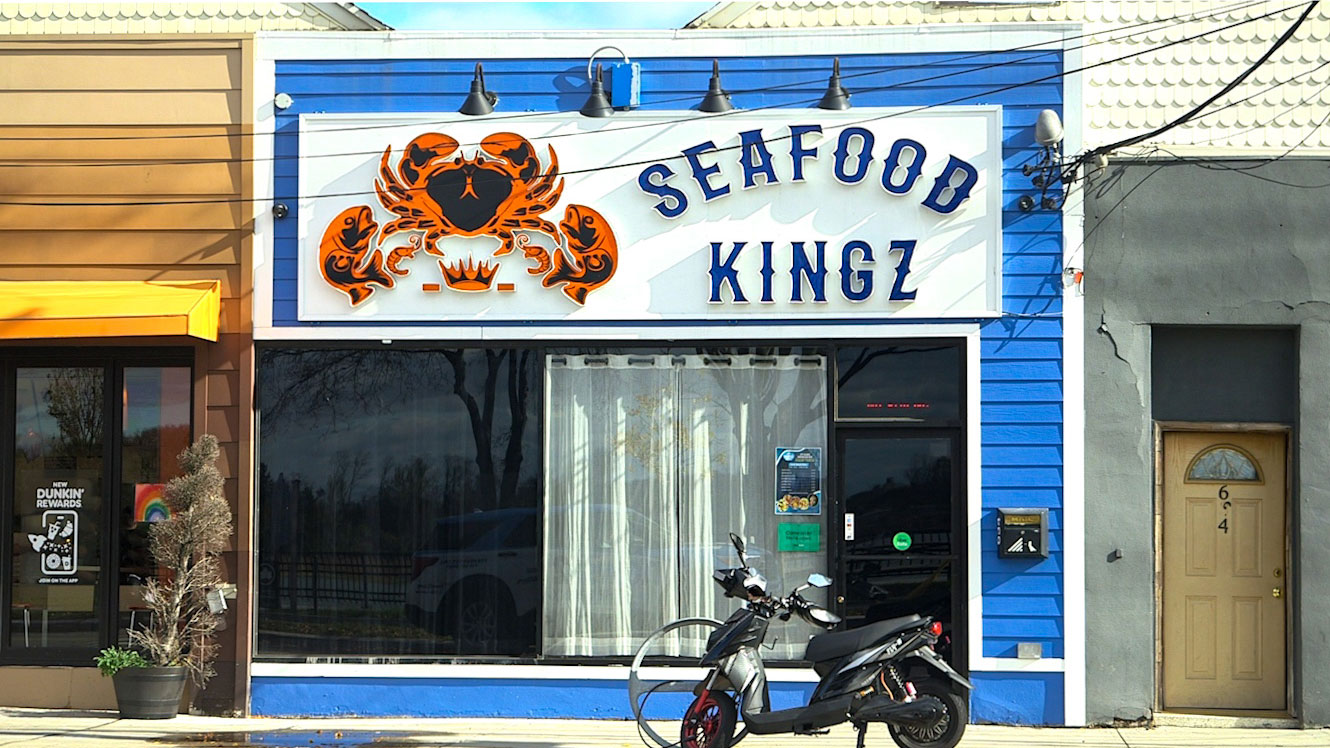 Seafood Kingz, thought to be City Island’s first Black-owned seafood restaurant, has earned praise from food critics, including a summer writeup in The New Yorker.

“We have to lose the ignorance”

Seafood Kingz is an intimate space featuring a few tables and a small bar in the front and booths in the back.  In spotlighting the family business’s soul-food menu, The New Yorker’s food critic said its chefs “make an art of breading and frying shrimp.”

Lelie said that after he and his father brought Seafood Kingz to City Island—they opened the first one in St. Albans, Queens in 2015—a couple of young adults threw juice at the shop and feces was seamered on its storefront window overnight.

Lelie, his father and his uncle, Max Dewindt, manage the restaurant together. Derell’s younger brother is the head chef. The harassment has left them troubled. But father and son are still optimistic about seeing positive change. 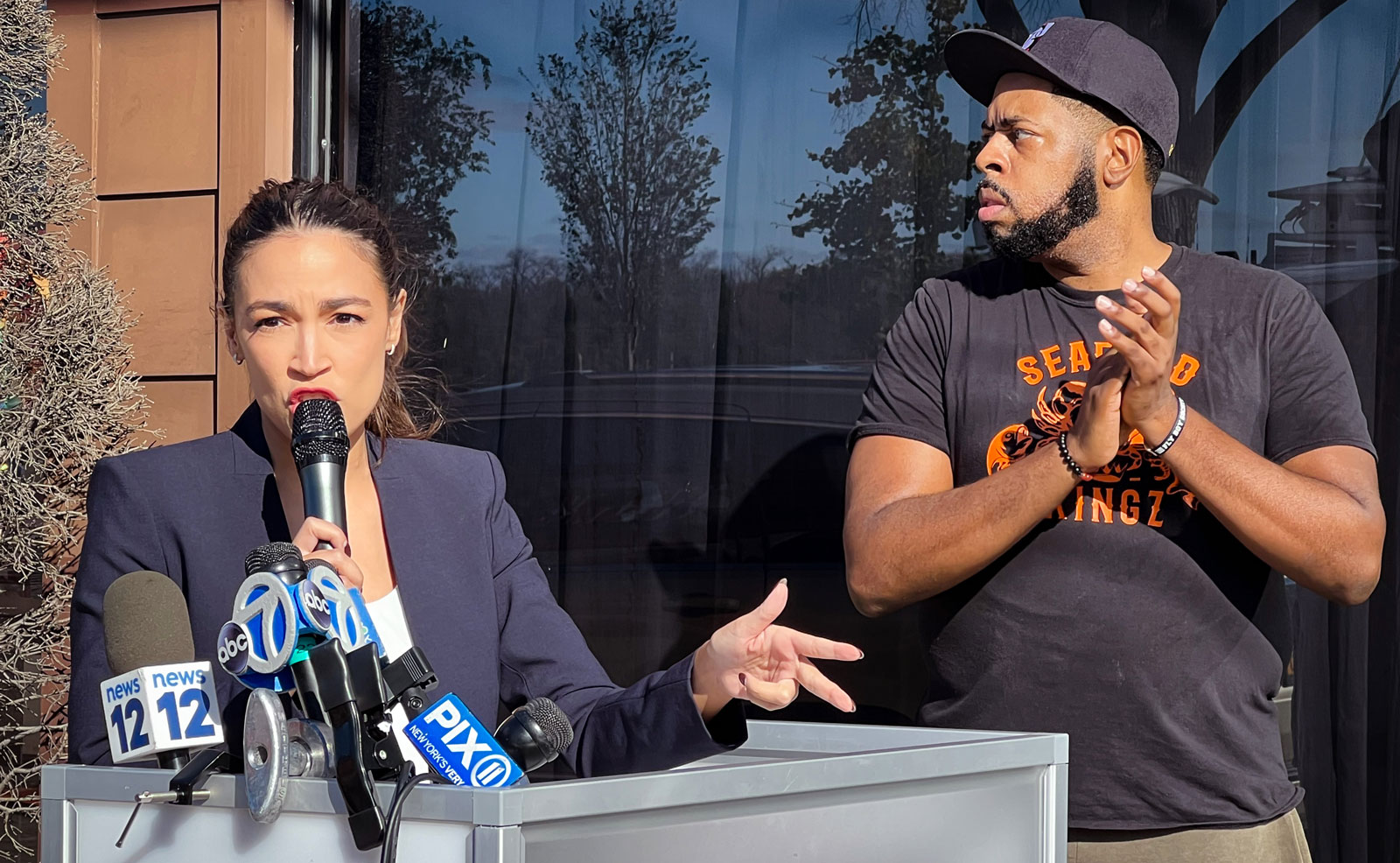 “We’re going to come together as a community of restaurants on this island—Italian, Jewish, Spanish, Chinese, Black—and we are going to continue to strive,” Derrel Lelie said after Ocasio-Cortez spoke at the rally outside Seafood Kingz.

“It’s 2022, we’re here and we’re all working together and making moves together,” Derell told the News Service.

“We have to lose the ignorance,” Darryl said in a conversation with Ocasio-Cortez before the rally.

Dominique Barbour, 33, a Bronx native and Seafood Kingz customer, came to eat at the restaurant to show support on the day of the rally. The general manager of a dog day-care center, she said the Lelie family works hard and provides a welcoming environment.

“I’m firmly against bullying and discrimination,” Barbour said. “And no one deserves to be pushed out of an establishment because of what they represent.” 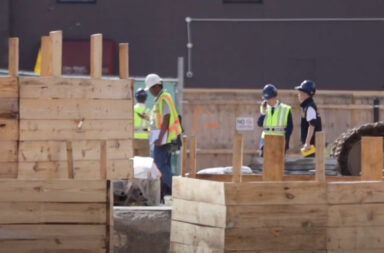 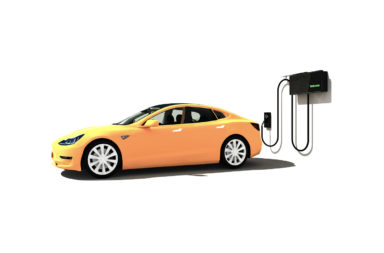 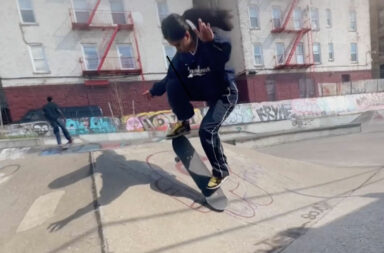