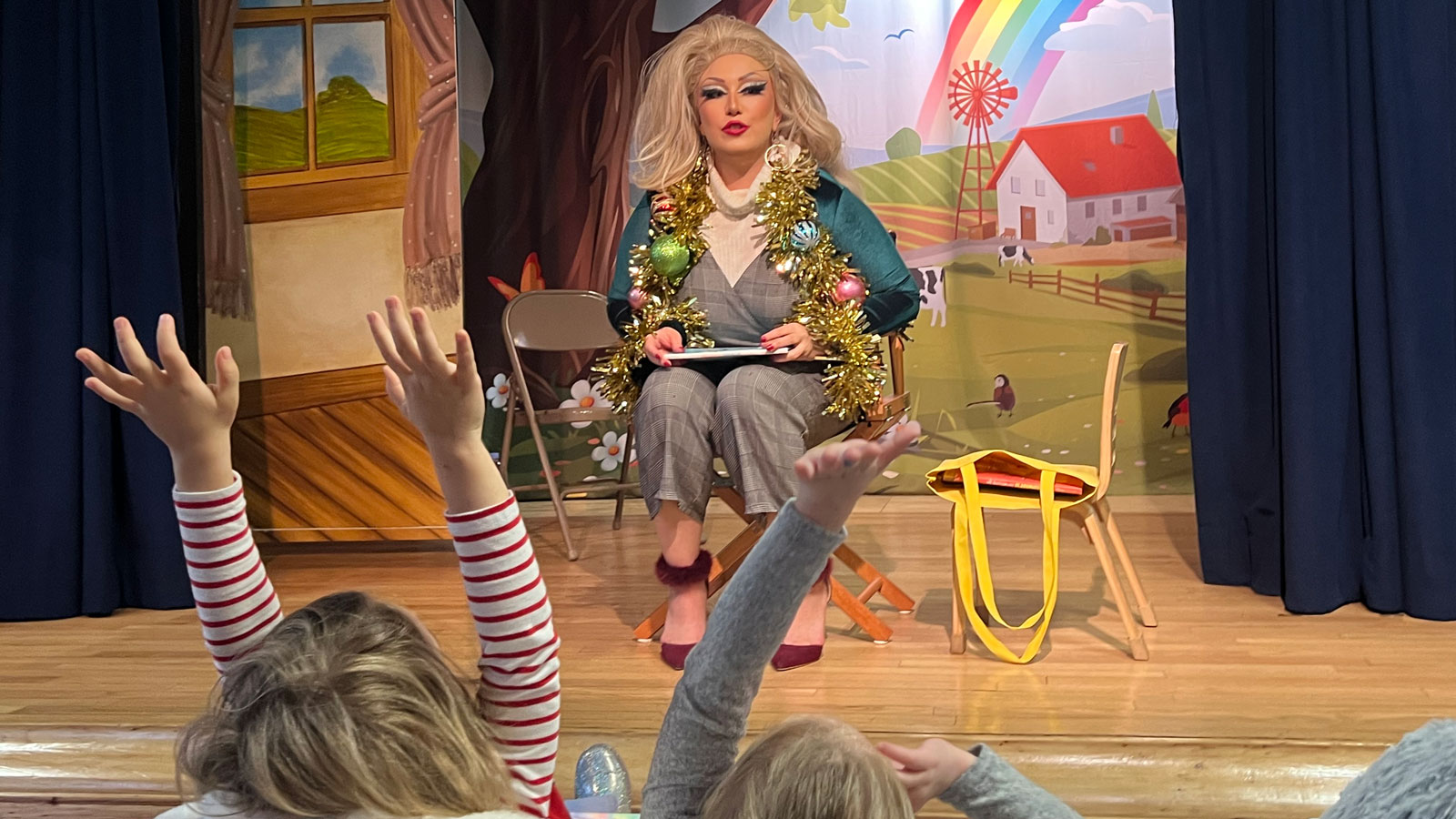 NOT UPSTAGED: The demonstrators outside the Staten Island Children’s Museum event did not faze Drag Story Hour reader Ms. Lori Lu: “I call them my closeted fans. I don’t think about the drag shows as much as they do.” (Photos/Joe Caffery)

STATEN ISLAND — A Drag Story Hour session at the Children’s Museum in Snug Harbor drew a larger-than-usual audience after protesters launched a campaign to shut it down.

Support for the museum came in the form of increased demand for tickets and the presence of advocates who set up a tent to distribute information on LGBTQ+ issues.

Sarah Kabalkin had registered her family for the event in early November after attending one of the museum’s previous Drag Story Hours, which usually are presented twice a year.

She said she almost decided not to go on Saturday because of forecasted rain.

“That was until we saw the plans for a protest,’” said Kabalkin, a Stapleton chef who came to the reading with her 6-year-old son, her mother and a 4-year-old niece. “We then decided to stick to our original plan—rain or shine.” 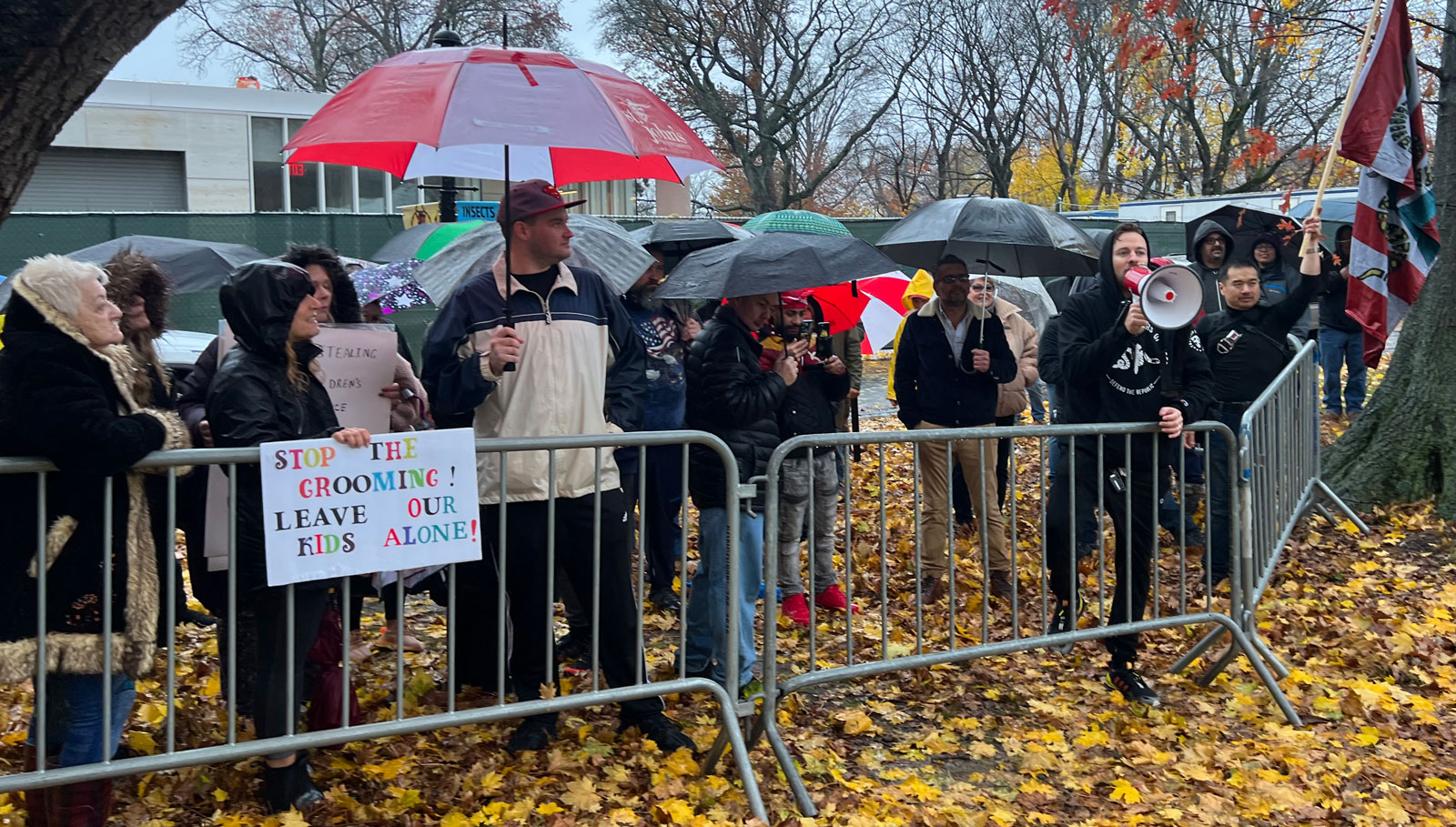 About 50 demonstrators gathered about 100 yards from the museum’s entrance, behind a barriers set up by the NYPD.

The protest was led by Scott LoBaido, 57, a Staten Island artist and conservative activist who called for the event be shut down in profanity-laced Instagram posts to his 95,000 followers, including one saying, “Come Saturday; we will be there in the thousands to correct the situation and to let you know that this once great museum is going to become nothing but an empty ——— storage unit.”

Dina Rosenthal, the museum’s executive director for 25 years, said demand for tickets shot up over 300% after word of the protest.

“Normally, one of these programs, inside on a day like today, might have, you know, 40 people,” she said just before the event. “We now have 173 tickets that have been asked for.” 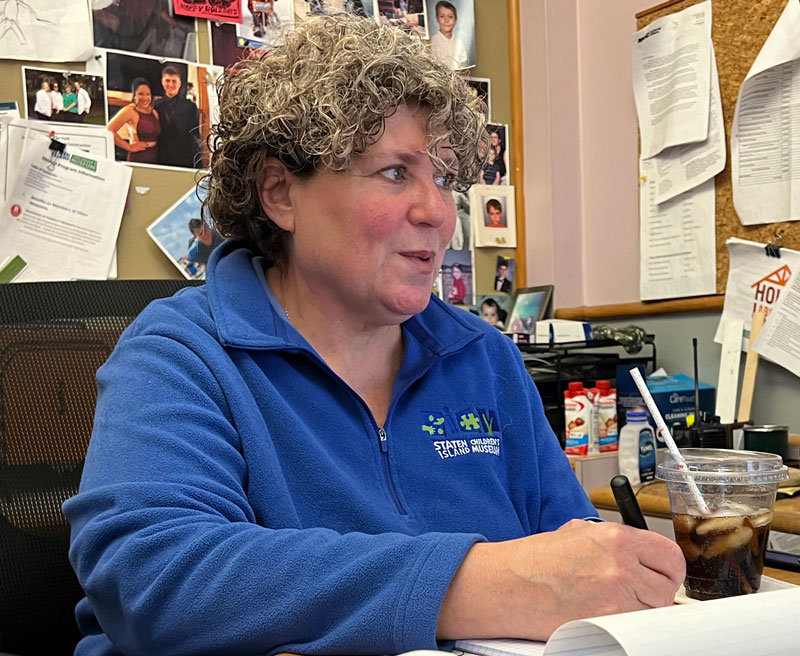 The museum never considered canceling, saidDina Rosenthal, its executive director.“It’s part of our mission…to empower kids to stand up to bullies.”

The museum’s playhouse had room for about 50 audience members. Many of the more than 100 people who were turned away from registering online for the free event pledged their support for the museum’s inclusive programming, Rosenthal said.

“It’s part of our mission, actually, to empower kids to stand up to bullies,” she said, “to be strong and independent, and to love themselves.”

Three police officers were posted at the door to inspect bags as children and their families lined up on the museum’s steps in a drizzling rain. A 100 yards away, a group of about 50 demonstrators gathered behind barriers set up by the NYPD. They shouted obscenities as they voiced their objections.

“Once again, this is not just about happening here in our community,” LoBaido said into a megaphone. “This is a trend happening across the country. Stop the sexualizing of our children!” 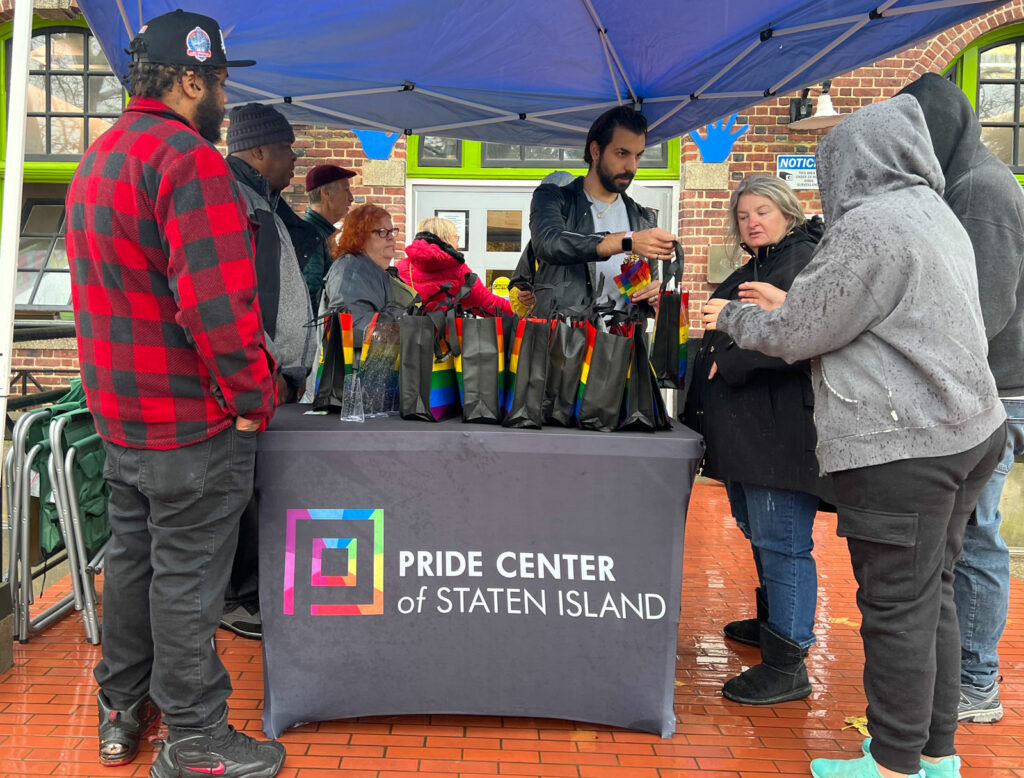 The Pride Center of Staten Island set up an information tent after its executive director, Carol Bullock, asked Rosenthal if the group could lend support for Drag Story Hour in face of the protest.

From a tent on the museum’s steps, the Pride Center of Staten Island shared information and swag bags with branded items such as hand sanitizer.

“Misinformation and miseducation surrounding an event like this are driving the protests,” said Carol Bullock, the center’s executive director, who had asked Rosenthal if the group could lend its support. “They’ve whipped up some rhetoric that makes it all about a sexual issue versus what it is, which is a fun event for children, educational as well as entertaining.”

After the event, Kabalkin said was shocked at the vitriol from the protestors.

“People tend to fear what they don’t know or understand,’ she said via email. “Sexualizing this event was creepy and completely out of context with its intention…I think that it proved how important programs like this are to educate and promote diversity, tolerance and inclusivity.” 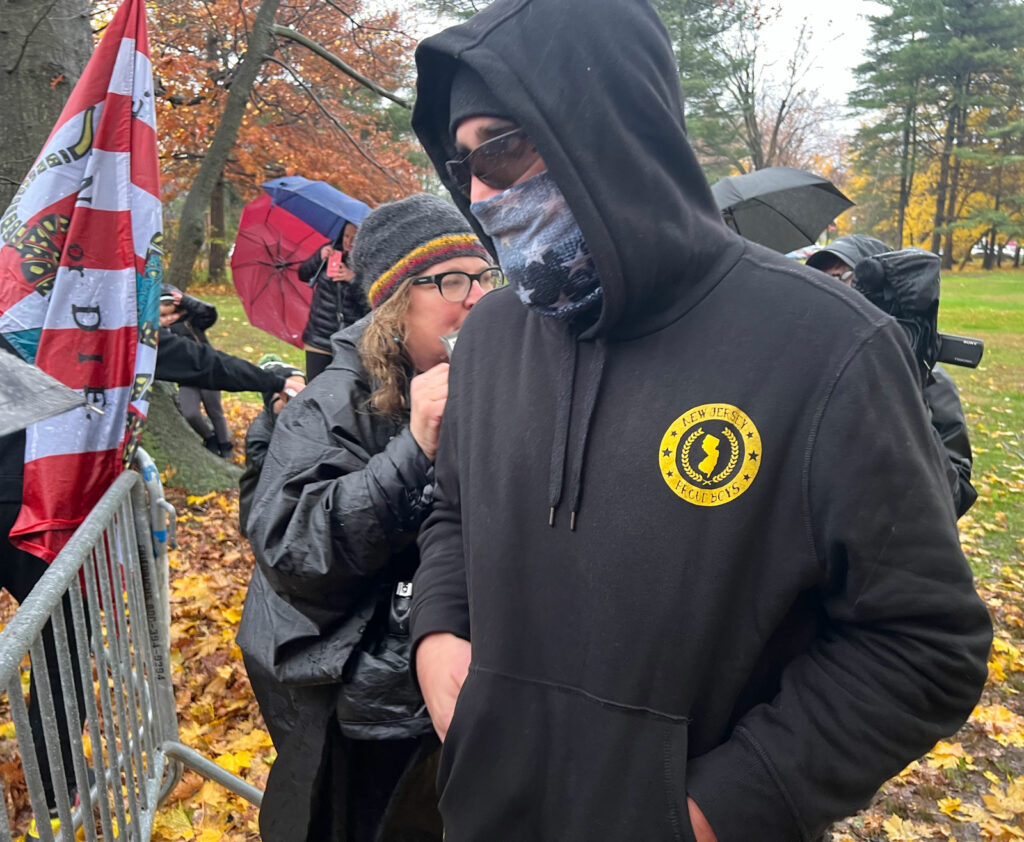 Men wearing the insignia of the far-right Proud Boys group walked the Snug Harbor museum grounds. Police steered them to the protesters’ area when they tried to move toward the museum entrance.

Journalists covering the event and police officers on the scene were called pedophiles and child abusers by some protestors. A small group of men wearing the insignia of the far-right Proud Boys group walked the grounds in their yellow and black sweatshirts and bandana-covered faces. When they attempted to get closer to the museum’s steps, police directed them back to the protest area.

Lobaido said he did not invite the Proud Boys to the protest.

“I did not invite anyone!” LoBaido said in an email. “It was a social media call-out.”

The LGBTQ+ advocacy organization GLAAD counts at least 124 significant threats and protests against drag story hours across the country. These actions are part of the rise in actions targeting the LGBTQ+ community this year, including demonstrations against story hours in California, Oklahoma and Montana. One turned violent in Oregon in October.

Yun-Hee Proffit, executive director of Drag Story Hour NYC, which presented the Staten Island event, said the hostile rhetoric around story hours has shifted to a more hateful tone. The organization participates in literacy events and art-based programming  across the city.

“We are undeterred and fully committed to the work that we’re doing,” Proffitt said. ”Especially because there’s this hateful narrative out there.”

Once upon a time 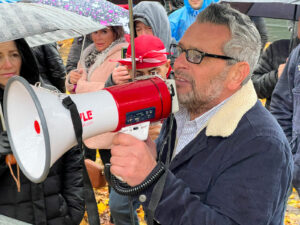 “This is a trend happening across the country,” said Scott LoBaido, who organized the protest against Drag Story Hour.

LoBaido told the News Service he is not anti-LGBTQ+ or transphobic.

“It’s publicly funded. That’s the major problem here,” he said, leaning over the barricade that separated the protesters from museum-goers. He stayed outside the museum for a little more than an hour and left before story hour began.

On a wooden stage inside, Proffit introduced storyteller Ms. Lori Lu, a native of Monterey, Mexico. Wearing a green cardigan trimmed with garland and Christmas ornaments, Lu asked the children if anyone knew what a drag queen was.

“It’s when a boy likes to dress like a girl,” said a girl in a red Santa hat, who smiled when she looked around the room and saw nods of approval. 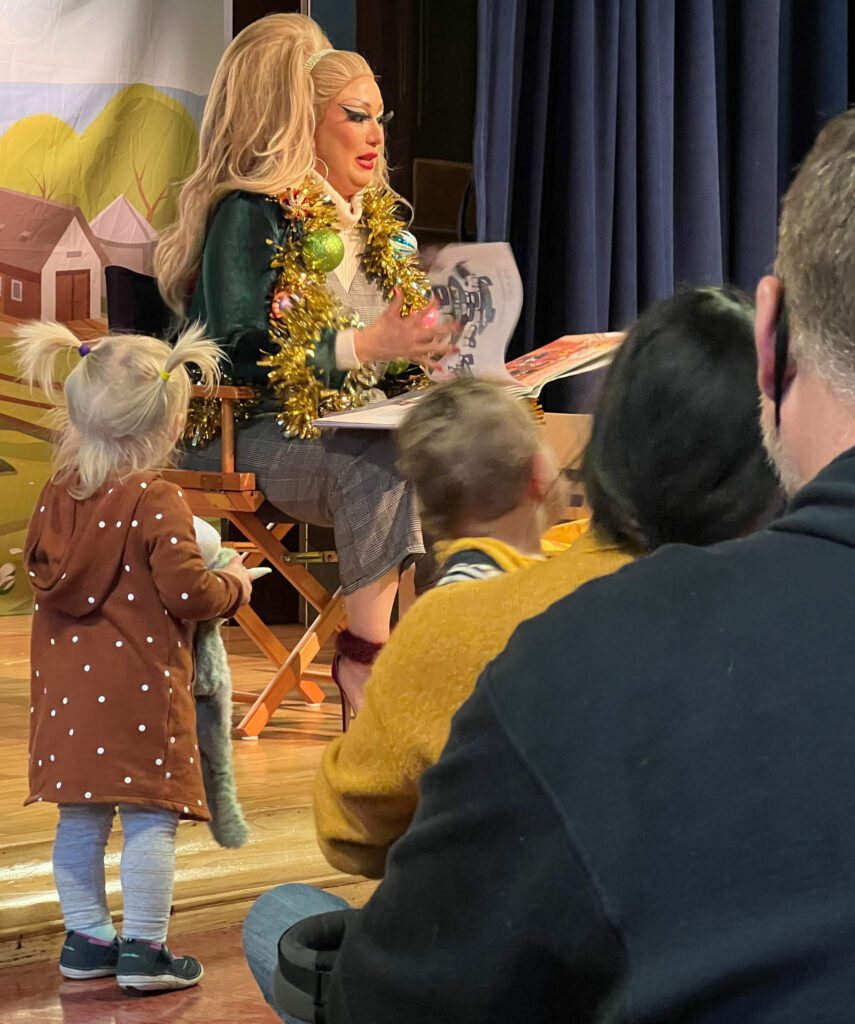 Lu, a Spanish teacher who has also participated in story hours in Mexico, read three children’s books with themes of tolerance and inclusion. The readings were broken up by several choruses of “Head, Shoulders, Knees and Toes.”

Lu said she is not bothered by protestors: “I call them my closeted fans. I don’t think about the drag shows as much as they do.”

Drag story sessions are important tools for combating stigmas and biases, she added.

“Not long ago, we had people thinking someone is inferior just because of their skin tone,” Lu said.

“Nowadays, we still have people who think that just because of your gender, you’re inferior. The danger of not doing Drag Story Hour is spreading hate.” 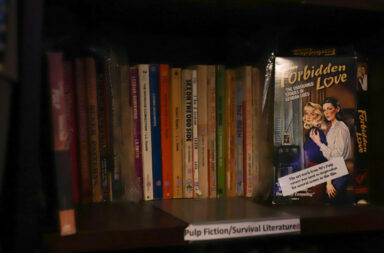 A Landmark in LGBTQ History 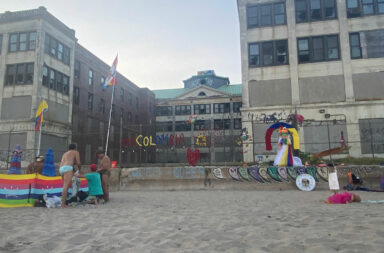 The Threat to People’s Beach 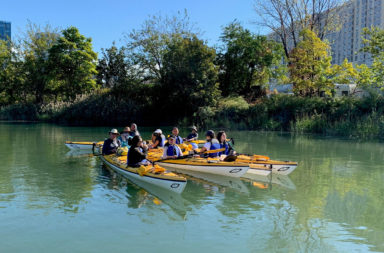 On a Health Trip